It is a curious thing that The Invasion suffers from the worst possible curse for a thriller: It is boring. 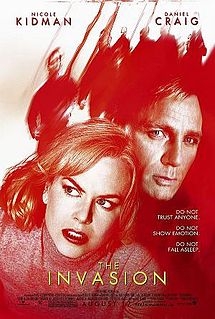 How did they screw up this movie? You’ve got hot stars (Nicole Kidman and Daniel Craig, fresh from his star-making turn as James Bond), you’ve got a creative and respected European director (Oliver Hirschbiegel, who made the Oscar-winning Downfall), and a tried-and-true plot that has already spawned two classic films called Invasion of the Body Snatchers (from 1956 and 1978). Updated for modern times when the public is terrified of invasion, plague, and spouses who act like strangers, The Invasion should have been great. But it is not.

Nicole Kidman plays Carol, a beautiful single mom who lives with her cute son Oliver (Jackson Bond) on a street filled with sexy neighbors (just look at all the adults when they are taking the kids out trick-or-treating!). One of her sexy neighbors is Ben (sexy Daniel Craig), and he’s a doctor, and they are kinda dating, but it is very chaste in modern movie terms. One day, Carol’s freaky ex-husband Tucker (Jeremy Northam) calls her at work (she’s a psychiatrist) and he is acting all freaky (aka friendly) wanting to see their son for a weekend. Well, that’s weird to begin with in her eyes, but soon we find out that dad is not quite dad anymore… because his body has been snatched!

Since this version is modern, and the science must be explained, Ben (a doctor, of course) gets a sample of pod-goo and give it to his pal Jeffrey Wright in the hospital’s lab. Jeffrey, in turn, gives us long-winded mumbo-jumbo explanations about what the “virus” is, doing a good job being deadpan when talking unflinchingly about alien cells while staring through a microscope. It doesn’t take long before all the neighbors are acting freaky, as well as everyone on the street, and after Tucker throws up in Carol’s mouth (YESSSS!), it is up to Carol to stay awake so she doesn’t cocoon and turn into an alien version of herself.

There are a few effective scenes that offer some heebie-jeebies, like a benign looking man in a suit ringing Carol’s doorbell late in the evening, claiming to do an important census survey, then trying to bust through the door (that should freak out anyone living alone, especially women). Plus when Carol tries to make it through a large city without being spotted by those who have changed (“Don’t show emotion, then they can’t tell who’s who…” says a terrified, stone-faced man sitting on the subway), the tension is very well-played.

But in the meantime, the pacing of the film is sluggish and rambling, there isn’t much character development, and the main actors seem to need some direction (and I’m not just talking about Kidman’s accent slipping from flat American, to Southern, to Australian). Strangely, I kept thinking of other modern virus movies that have managed to be so much better and more terrifying, such as 28 Days Later, or even I Am Legend. By the time The Invasion wrapped up (with a tacked-on “happy” ending that was way less effective than previous version), I simply wasn’t interested anymore.

Rumors abound that the film was cut and recut before it was finally released to little fanfare, and that the final cut doesn’t at all reflect the director’s vision. Sadly, there is no commentary on the DVD from Hirschbiegel, just a bunch of throwaway featurettes. In particular, one called “We’ve Been Snatched Before: Invasion in Media History” goes on and on, with interviews of generic experts and doctors (one even has a stethoscope hanging around his neck!) talking about the modern fear of epidemics and viruses. Yeah, sure, that’s true and interesting… but it doesn’t explain why this version of Invasion of the Body Snatchers was such crap and had the potential to be so much more!