Oh, how I wanted this to be great. Oh, how disappointed I was that it was not.
By Vickieon December 9, 2016
0 Comments
Our Rating 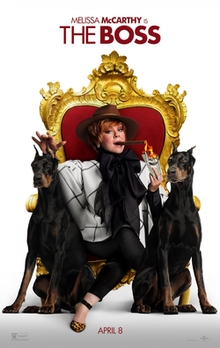 When last we saw Melissa McCarthy on the big screen, she was KILLING IT in Spyas a mild-mannered woman who learns to embrace her inner badass. Think of The Boss as the anti-Spy. Here, not only is the storyline flipped – McCarthy plays a badass who learns to tap into her sensitive side – but, sadly, this film is without that deft blend of humor, slapstick, raunch and heart that made Spy such a success.

In The Boss, McCarthy is Michelle Darnell, a mega-rich, mega-successful corporate giant, who takes a big fall (she’s nailed for insider trading by former beau Peter Dinklage) and then has to crawl her way back to the top. Once freed from prison, Michelle latches on to her former assistant, Claire (Kristen Bell), and promptly begins her next business venture: selling Claire’s homemade brownies to compete with the Dandelions (think: Girl Scouts) and their cookie-sales empire. Along the way, Michelle bonds with Claire’s daughter (Ella Anderson) and soon starts to find herself conflicted over the woman she’s always been, and the one she always wanted to be.

If you just rolled your eyes, that’s okay.

Seemingly unable to decide exactly what kind of film it wants to be – a biting satire? a slapstick lowbrow comedy? a touching redemption tale? – The Boss instead tries to be all things to all audiences, but never really lands in an authentic way on any of those options. There are the requisite physical-comedy sequences that find McCarthy being tossed around, the predictable efforts at a heart-tug or two, and some salty language thrown in for good measure, but it all feels haphazardly thrown together, as though the final film is a result of too many cooks in the narrative kitchen.

McCarthy, despite the so-so material, remains immensely entertaining, though, and was behind every laugh-out-loud moment I enjoyed (and there were a few). In every film she’s made, she’s proven she knows how to tread the likable/unlikable line very carefully, so that a vital glimmer of humanity always shines through, no matter how ridiculous or rude the character she’s playing. The Boss is no exception. As far as the supporting players, Dinklage looks to be having a great time with his bizarre-but-hilarious character, Kathy Bates turns up for a winning stint as Michelle’s bitter former mentor, and Cecily Strong has a glorified cameo that scores. Unfortunately for co-star Bell, she’s given very little to do, save for being the “straight man” to McCarthy’s antics.

Not terrible but not amazing, either, The Boss is another entry in McCarthy’s growing list of leading-lady credits… just not an overly satisfying one.