The silences in Silence force the viewer to ponder: What would it take for you to renounce your most deeply held moral truths?
By Lindaon May 4, 2017
0 Comments
Our Rating 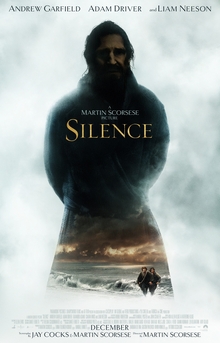 It has been said that Silence is Martin Scorsese’s passion project. A fan of Shūsaku Endō’s 1966 novel, he has apparently been trying for three decades to bring the story of Jesuit priests in 17th century Japan to the big screen. You can tell from the gorgeous and raw imagery and the soul-searching of the characters that Scorsese poured his heart and soul into this film.

The story follows two Portuguese priests, Padre Rodrigues (Andrew Garfield) and Padre Garupe (Adam Driver), disciples of one Padre Ferreira (Liam Neeson) who has apparently disappeared among the prosecuted Christians of Japan. Rumor has it that Ferreira renounced Christianity, which is completely baffling and unbelievable to the two younger priests that he would commit apostasy. They get the church’s approval to go to Japan, to continue the work of bringing the “truth” of their beliefs to the wayward country, and to find their mentor.

Japan is represented as a repressive culture that has driven Christians underground. Christians are tortured and killed if they refuse to renounce their religion by the local “inquisitor” (Issey Ogata). It is only a bonus, and is worth lots of silver, if actual priests are turned in to the authorities. Rodrigues and Garupe hide in rural villages, sheltered by desperate Christians that almost see them as physical representations of their lord. Other villagers, scared for their lives, see them as a threat to their own safety.

There is brutal torture and suffering in Silence, and there is also tragic, symbolic beauty. Some of the imagery is stunning, specifically of three villagers crucified on crosses on a beach, waiting for a slow death as the waves of the tide roll in. In another scene, a person is shockingly and quickly beheaded–it happens so fast that I realized that the actual moment wasn’t shown, but you feel like you saw it–and that person’s body is dragged across the sand, leaving a vivid, long red stain. Rodrigues is appalled by what he sees, and realizes that the inquisitor’s goal is not necessarily to break the peasants, but to break the priest.

On the surface, this is of course a film about Christianity and faith in a Christian god. But take half a step back, and the theme is bigger. Both the priests and the Japanese not only think they are right in their beliefs, but they KNOW they are with unflinching certainty. It is baffling that the other side can’t see what they know is to be the truth. The Japanese may be torturing the Christians, but they are doing it with a logic of truth. It doesn’t take long to realize that you could replace the two views with any two sides of an argument, any two religions, or any two political parties. Everyone has faith in their own beliefs. How far would an opposing belief have to push you to renounce what you know is true?