The weird thing about Mary Poppins is that it’s as tediously epic as it is supercalifragilisticexpialidocious. 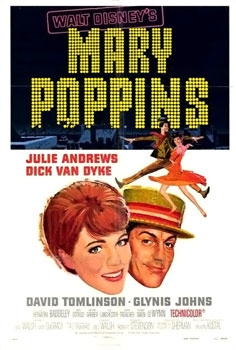 Having grown up with the soundtrack to Mary Poppins in my little record collection, I learned the film’s fabulous songs long before I ever saw the movie. When it finally came on TV, I remember my parents warning me that it was going to be on for a long time. I was determined to sit through the whole thing, so they hauled my dollhouse out of my bedroom (exactly the only time this ever happened, as it was rather heavy) and let me play with it while I watched. I’m so glad they did. By the time the movie was half over, I felt my life actively ebbing away.

For anyone not familiar with the story, Mary Poppins is a magical nanny who comes to the rescue of the Banks children. Jane (Karen Dotrice) and Michael (Matthew Garber) have been through a long string of bad nannies when Mary comes along, and despite the trappings of an ordinary upper middle-class childhood, they have little to be happy about. Their emotionally distant father (David Tomlinson) seems to care for nothing but work, and their over-extended mother (Glynis Johns) is too busy with her various causes and social functions to bother about the children.

When Mary Poppins flies in with her magic umbrella, she brings light and happiness to Michael and Jane. Suddenly their days are filled with song, laughter, and fantastic adventures, and it seems that all of Mary’s friends are just as much fun as she is. Her sweet almost-beau Bert (Dick Van Dyke) is an especially endearing jack-of-all-trades with a goofy Cockney accent, and he joins them on several exciting little jaunts.

All of this is well and good, but it is essentially a band-aid for what ails the Banks children. What they truly want is a good relationship with their parents, and Mary Poppins’ greatest accomplishment is bringing the family together. It’s one thing to dance with animated penguins, laugh til you fly, or sing on the rooftop with a troupe of chimney sweeps, but it’s all pretty empty when it seems as though your parents can’t see you. Once Mary succeeds in making the Banks family functional again, she pops open her umbrella and flies away: her work is done.

The weird thing about Mary Poppins is that it’s as tediously epic as it is supercalifragilisticexpialidocious. The good bits are so wonderfully memorable that you forget all the boring business along the way, but for every rollicking adventure taken with Mary Poppins, there’s a dreary segment that finds the father singing about banking or the mother barking about women’s suffrage. It can all be a bit rough on the old nerves at times, but that’s when the skip button comes in handy. As Bert says, “it’s a jolly holiday with Mary,” and there’s plenty of fun to be had for those willing to go along for the ride.

Like all of the recent Disney rereleases, the 45th Anniversary Edition of Mary Poppins is loaded with extras. Disc 1 includes audio commentary by Julie Andrews and Dick Van Dyke (among others), the option to watch the movie with pop-up facts, and a song selection option so you can skip to your favorite song and sing along with the lyrics on. Disc 2 contains a featurette on the Broadway version of Mary Poppins as well as the bonus short “The Cat That Looked At A King” taken from Mary Poppins Opens the Door by P.L. Travers and starring Julie Andrews. The Music and More section includes a “Magical Musical Reunion” with Julie Andrews, Dick Van Dyke, and Richard Sherman, “A Musical Journey With Richard Sherman”, and the deleted song “Chimpanzoo”. Backstage Disney takes us behind the scenes of the movie with featurettes on the making of Mary Poppins, the film’s special effects, Dick Van Dyke’s make-up test, original and reissued trailers and TV spots, and a still art gallery. You can easily spend as much time with the extras as you do with the movie itself.