The Secret Life of Pets 2

This perfectly adequate sequel to 2016’s The Secret Life of Pets isn’t amazing but isn’t all that bad, either. It amplifies some of the best components of the first film – namely, the adorable animal behaviors of cats and dogs (and birds and rabbits and the like) that will no doubt make pet owners in the audience laugh out loud (like I did) – but suffers a bit from a scattered story that sends its furry heroes off in different directions. 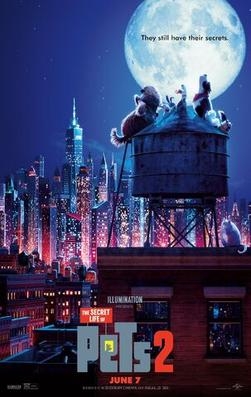 This time around, amiable dogs Max (voiced by Patton Oswalt, taking over from Louis C.K. for obvious reasons) and Duke (voiced by Eric Stonestreet) are living happily with their expanded family, which now includes toddler Liam. Perpetually nervous Max is like an overprotective parent, constantly panicking that Liam is in danger – a trait that doesn’t make a family trip to a farm any easier for anyone.

While Max is away, he entrusts the care of his beloved toy (Busy Bee) to Gidget (voiced by Jenny Slate), who promptly loses it to a cat hoarder’s feline-filled apartment. So, Gidget sets out to learn “the ways of the cat” from rotund cat pal, Chloe (voiced by Lake Bell).

And then there’s Snowball the rabbit (voiced by Kevin Hart), who’s living the good life with his human, dressing up – blue tights, mask, attitude and all –- as crime-fighting Captain Snowball. When a new pup in town named Daisy (voiced by Tiffany Haddish) wanders into the neighborhood, she comes to Snowball for help rescuing a circus tiger being abused by his handler. It’s a weirdly dark plot that seems out of place this otherwise light and fluffy film, to be honest.

The film then splits into three separate arcs, each following a different pair of characters encountering its own unique foes and foils: for Max and Duke, it’s grizzly farm dog Rooster (voiced by Harrison Ford); for Gidget and Chloe, it’s about a hundred stray cats; and for Snowball and Daisy, it’s a villainous Russian trainer and his quartet of bloodthirsty wolves. Each storyline has its own built-in lesson, yet I couldn’t help but think the whole movie would have been much stronger if all the characters had been involved in the same single narrative from the get-go. As it is, they converge towards the end and that’s when the film is at its best. Otherwise, each of the three stories is pretty thin on its own – which is presumably why none of them can be considered the “main” plot, and why the film is structured more like an episode of a television show.

On the whole, the antics throughout are as cute and lively as one would expect from the trailers, and the proceedings – though not really inspired – are colorful and fun enough that the pint-sized set will no doubt be entertained. There isn’t anything especially new or exciting in the film, but Pets 2 is a decent-enough follow-up that families – and animal lovers – can enjoy together.