Pfffft. With Dark Phoenix, the X-Men saga as movie audiences have come to know it closes out with a disappointing whimper instead of any kind of grand last hurrah. 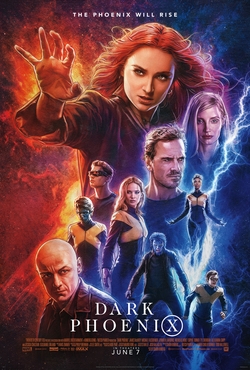 Clearly trying to capitalize on the “end of an era” marketing that helped propel Avengers: Endgame into the box-office – and favorable-review – stratosphere, but instead making the problems found in X-Men: Apocalypse even worse, this final, quasi-origins installment of the mutant franchise is sorely lacking in heart, humor, depth and, ultimately, viewer satisfaction. It’s hollow, filled with (I think?) unintentional camp and clunky dialogue, and flat performances that feel phoned in. Can you tell I didn’t care for it?

Sophie Turner reprises her Apocalypse role as the young Jean Grey, a mind-control-master mutant, who’s now having something of an existential crisis after absorbing the full brunt of a “solar flare” during a mission in space. Suddenly, Jean’s running really hot, leaving unintended destruction in her wake because she can’t, as multiple characters repatedly observe, “control her power.” Charles Xavier (James McAvoy) is worried, Raven (Jennifer Lawrence) is worried, Hank (Nicholas Hoult) is worried, Scott (Tye Sheridan) is worried… everyone is worried! Well, except Erik (Michael Fassbender), who’s in exile on what looks like a mutant-hippie commune and kind of thrown in as a narrative afterthought.

Jean, meanwhile, just seems pissed off and confused and perpetually on the brink of tears or a serious fit of rage. Turner essentially plays one of those two notes throughout the entire film.

While all this angst is going on over at the X-Mansion, a bunch of nondescript aliens with a super-vague agenda (I think they want to take over Earth but I have no clue why) drop in on a lakeside dinner party and promptly assume the identity of its bleached-blonde hostess, Jessica Chastain, who becomes one of the cheesiest, most laughable “villains” in any superhero movie ever. One of the filmmakers’ biggest mistakes is assuming that stripping her of her eyebrows will make her menacing, and that weighing her down with eyeroll-inducing one-liners will somehow give her gravitas. Neither is the case.

This unnamed alien sets her sights on Jean – more specifically, all that juice from the “solar flare” – and thus sets in motion an uninteresting series of tiresome battle sequences and mutant hand-wringing, as Charles and company race against the alien gang to try to rein Jean in before she goes supernova.

But, really, all I kept thinking was, “Who cares?” As a final chapter, I was hoping for high stakes, gripping drama, engaging characters… and I got none of those things.

Turner is decidedly meh as one of the franchise’s most iconic characters, Chastain is unintentionally hilarious, Lawrence seems to have signed on strictly for the pay cheque – only McAvoy and Fassbender appear to be trying to make something meaningful of the otherwise ho-hum proceedings… which then makes it feel like they’re in their own, completely different movie.

A LOT of attention was clearly paid to the special effects, but to the detriment of story and character. The plot is thin at best, and isn’t enough to sustain a nearly two-hour running time, and supporting X-Men players are given virtually nothing to do (::: waving at Evan Peters’ Quicksilver, Alexandra Shipp’s Storm and even Kodi Smit-McPhee’s Nightcrawler :::). They feel tacked on just so they can be name-checked by the audience.

I’m a big fan of the MCU, and I know the X-Men films have been hit and miss over the past two decades, veering back and forth between fabulous (Days of Future Past) and flaccid (The Last Stand). Unfortunately for all involved, especially as a last-chapter entry, this latest outing lands squarely in the latter category.