The Art of Being Straight

You have to know what you’re walking into when you see a movie like The Art of Being Straight. It’s short, sweet, made on a nonexistent budget, stars the writer-director in the lead role, and by the way, it’s a gay movie. Kind of. 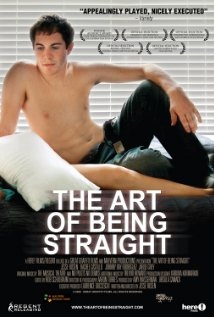 You have to know these things when you walk into this movie so you don’t expect more than it has to offer. No, it doesn’t feature the most convincing performances, and the script isn’t really anything new, but it’s executed with sweetness that makes you root for it.

Writer-director Jesse Rosen stars as Jon, a young man who moves to Los Angeles to get away from a bad breakup (with a GIRL). His roommates are all typical straight guys spewing “That’s so gay”-style banter (which might have been more convincing if the actors weren’t so clearly gay themselves – at least it seemed that way to me). The movie wastes no time getting Jon into a compromising situation with his boss, Paul (Johnny Ray Rodriguez), despite Jon’s insistence that he’s not gay, no way, totally straight – cut to Jon and Paul getting naked together.

Meanwhile, Jon’s friend Maddy (Rachel Castillo) is in a gay relationship, but seems to have a thing for her new neighbor, a scruffy hipster who takes well to Maddy’s abrasive style of affection.

By now, you can generally see where all this is going. Jon will struggle to accept his newfound sexual identity, and start to feel uncomfortable around his old buddies and their gay jokes. Maddy will deal with her unexpected heterosexual attraction, on top of her fear of commitment to her girlfriend Anna (Emilia Richeson), who wants to get serious. The Art of Being Straight ushers us through these developments with efficiency – which I mean as a compliment, since it gets us to the third act that much faster, and that’s when things start getting interesting.

You see, it’s not that Jon is gay, exactly. This movie sidesteps the formula by leaving Jon’s sexuality as much a mystery to us as it is to him. Did Jon like having sex with a man? Yes. Does that mean Jon was putting up a front by hooking up with the ladies all this time? I don’t think so. After sleeping with his boss, Jon immediately hooks up with a girl as if to find out whether he still likes it. He seems to. Now what? It’s not as simple as just coming out.

But the real star here is Rachel Castillo as Maddy. Her performance is by far the most memorable here. Maddy is perfectly flawed – a loudmouth, a stoner, a commitment-phobe – but she’s also a caring friend, and incredibly likable thanks to Castillo. I have to confess, I spent many of Jon’s scenes waiting for Maddy to show up again! It is the only performance in the film that looks effortless. She’s a star.

Ultimately, this is a cute little movie with its heart in the right place that I mostly forgot about by the next day. The cast is appealing all around, and at a brisk 71 minutes, the film doesn’t overstay its welcome.