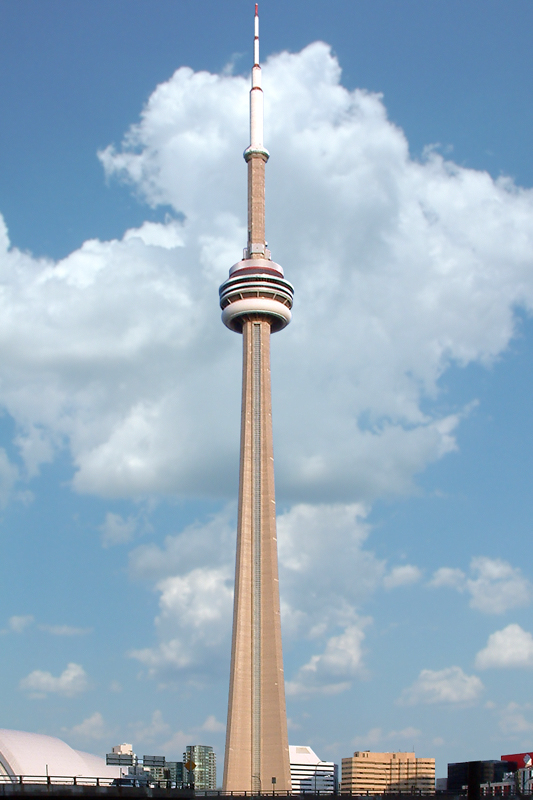 I guess today is technically our first full day in Toronto, although Dan and I spent much more time awake and doing stuff yesterday, since we arrived in town at 6:30 AM and didn’t sleep until 9 PM. Kind of shockingly and kind of unsurprisingly, we slept for a whopping 13 1/2 hours last night. And magically, it appears that in one night, I have overcome not only the difference in time zone, but my nocturnal sleep schedule that is officially over now that I’m done with ANTM. If I go to bed at a decent hour tonight, I could be in the clear when it comes to staying awake and actually experiencing Toronto.

We kicked off the day by eating in one of the hundreds of food courts underneath the city. Toronto is like, half underground. There is a massive labyrinth beneath downtown including shops, restaurants, coffeeshops, drugstores, and of course, the subway. You could navigate most of the city without ever seeing daylight if you wanted to. And boy, do I find that prospect appealing! LA could use a system like this, for when it’s 100°F as it has been for weeks in the hell hole I call home. Interestingly, I seem to have brought a little heat wave with me, as it reached a muggy 90°F in Toronto today.

We visited the CN Tower, which, in case you don’t know (as I didn’t), is that defining spindle in the Toronto skyline. To my delight, we could walk there from the hotel without spending more than 5 minutes outside, thanks to a covered “Skywalk” that further convinced me that Toronto residents need to feel like they’re underground even when they’re above ground. Riding a glass elevator to the top of the CN Tower and enjoying a 360° panorama of the city was a somewhat familiar experience thanks to growing up in the home of the Space Needle, but it was still an amazing view of the city (though visibility was conspicuously limited thanks to a haze of smog and humidity).

At the top of the tower, there is an area with glass floor so you can see the city directly below your feet. You can imagine how well I handled this, although I couldn’t not conquer it. But I did spend some time crawling on it before building up the courage to stand, and after that I cowered in the corner a tiny bit. One little girl ran onto the floor and immediately started STOMPING as hard as she could with both feet. What a surprisingly young age for a death wish.

Tonight, of course, we attended our very first TIFF screening, Starting Out in the Evening (8/8) on the opening night of my very first TIFF! Vickie met us for dinner and an entertaining discussion of Jessica Biel spin-offs (“Loving Annabiel”; “Spongebiel Squarepants”). You see, Dan and I invented a game called, “How could this movie be worse?” where you imagine Jessica Biel in the lead role of a movie, usually already terrible. Trust me, it’s more amazing than Apples to Apples.

Vickie walked us to the Varsity theater, and along the way we spotted hordes of “industry types” crowding the area, with their little laminated passes proudly displayed even though they were just walking around on the street or checking into the Four Seasons. Of course we made fun of them, but of course I want to be one of them. Come on! I would make a great industry type. I already take myself too seriously and like to wear high heels.

The line at the Varsity was INSANE. There were multiple lines next to each other as well as combined with each other, as there were lines for certain movies and one line for whatever movies didn’t have their own lines. After being misinformed, Dan and I ended up in the right line and snagged great seats before the theater got really crowded. And in addition to our first movie of the fest being ABSOLUTELY AMAZING, there was an illuminating Q&A with Andrew Wagner (co-writer, director, and producer) afterward.

Also, completely randomly, I ran into a girl I worked with at First Look Pictures (whose King of California is playing here at TIFF). Well, she worked there, and I was interning. But it was interesting running into her, because of how weird it didn’t seem; as Vickie pointed out, this is like movie industry summer camp, which disguises the fact that we’re 3,000 miles and an international border away from home.

We walked back to the hotel, fully satisfied with our first day of TIFFing. The days to come bring many more films, and I’m looking forward to exploring the city further now that it’s fully in festival mode!