At last! The festival is over!

As I’ve said repeatedly during TIFF 2007, I was just too pooped to enjoy it properly, I think. So, as strange as it may sound, I’m actually quite relieved that the whole thing is done. I’m not setting my alarm for tomorrow morning, I won’t be sprinting back and forth across the downtown core and I’m fairly certain that I won’t be consuming peanut M&Ms as any of my three main meals for the day.

Today, though, I did all those things.

The morning air was extremely chilly (9ºC when I left home!), and I began at the Ryerson with Death Defying Acts (6/8). I’d selected this movie more for its timing than anything else, and I was sort of apprehensive about seeing it because I feared it wouldn’t be compelling. Thankfully, I was wrong and quite enjoyed it despite myself. The film, as director Gillian Armstrong pointed out in her pre-film Q&A (she’d heard about Todd Haynes doing it yesterday and followed suit!), is a “what if” story rather than a biopic, and it tracks the relationship between Harry Houdini (Guy Pearce) and a Scottish psychic/con artist (Catherine Zeta-Jones). It’s beautifully shot and the art direction is gorgeous, and I didn’t drift into neverneverland at any point… which is saying a lot for a 9am movie on the last day of the festival.

My only issue with this particular screening was the fact that, at the end of the pre-film Q&A, the moderator told us (the audience) to stick around after the credits because there was a “50/50 chance that we might have a very special guest joining us!” Cut to everyone in the audience sitting in anticipation as what seemed like the world’s longest credits rolled… only to have the lights come up and to see no one at all onstage for anything. Thanks for making us wait an extra seven minutes for a whole lotta nuthin’! Sheesh.

(Speaking of Q&As, by the way, did you know that the TIFF website has all the press conferences available to view online?)

That additional wait, plus the fact that the movie started 15 minutes late, left me precious little time to head over to the Bader for my next film. I tried to find something resembling “lunch” en route, but line-ups at assorted fast-food establishments meant I wound up eating chocolate instead. 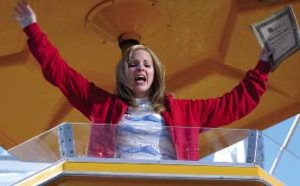 I made it to the Bader with time to spare before Smiley Face (5/8) started. It’s the new film from director Gregg Araki, and it’s a stoner comedy. It follows a pothead (Anna Faris) over the course of one very bizarre day. It was cute, I suppose, but it didn’t really do much for me.

A quick – and perhaps ill-advised – lunch of spring rolls followed before I took in film #3, the pretentious and boring L’Amour Caché, a French film that took itself so seriously it was bordering on parody. It centers on a wife and mother (Isabelle Huppert), who’s tried to commit suicide a few times and who’s seeing a shrink (Greta Scacchi) to uncover the reasons why. Problem is, the whole movie is told via the device of having the main character write letters that the shrink then reads… leading to dissolves into the past, strange dream-like sequences and some breaking of the fourth wall as Huppert addresses the camera directly. The framing for the film was also off, so the boom mic was visible a lot of the time. I stuck it out for half an hour and then bailed. Enough already. But the guy sitting next to me left even earlier – he didn’t even make it 10 minutes before picking up his bag and walking out!

I’m delighted to say that my final film of the fest became one of my faves. Ping Pong Playa’ (7/8) is a low-budget indie comedy that’s a fun, feel-good ride through the world of competitive ping-pong playing. Chinese-American Chris “C-Dub” Wang (Jimmy Tsai) loves basketball and rap, but finds himself enlisted to train a bunch of misfit kids (all of whom are adorable) at his parents’ ping-pong academy when his superstar brother is injured. Aside from its inherently boisterous tone and clean, slapsticky humor, the film is buoyed by terrific supporting turns from Peter Paige and Scott Lowell (of Queer as Folk fame), as a pair of rival ping pongers, and MADTV‘s Stephanie Weir as the league president. I loved it.

Then, friends, the fest ended for me. No more movies.

Random Factoid of the Day: I have none and I don’t care.

Line Buzz: Lots and lots of great buzz on Buddha Collapsed Out of Shame, but with the caveat that it is apparently a very tough film to watch and that it will make you cry (so I was told).