Felicity Huffman plays a biological-born male who wants nothing more than to be a housewife, and is desperate to do it.
By Lindaon October 27, 2013
0 Comments
Our Rating 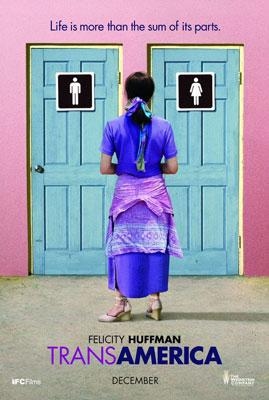 What a stroke of luck for the filmmakers to have Felicity Huffman as the lead in Transamerica! Cast by director Duncan Tucker just before Huffman began filming the pilot of the smash TV hit Desperate Housewives, the film scores a coup by not only having a super-talented actress as the heart and soul of the film, but also gets priceless publicity-by-association that any filmmaker would kill for. Luckily for all involved, the film is pretty darn good as well.

Some thought that a man should play the role of Bree, a transgender woman who is one week away from the surgery that will finally make her female. But director Tucker, out of respect for the character’s transformation into her true physical self, felt that the part should be played by a woman. Felicity Huffman, an indie and stage star long before she was a housewife, is the perfect match, having the skill and talent—both physical and emotional—to play Bree. How a biological woman can so convincingly look like a man trying to pass as a woman is certainly a feat.

One week before her long-awaited surgery, Bree gets a phone call from a long-lost son who was the result her sole sexual tryst during her life as a young man in college. Bree’s therapist (Elizabeth Peña, I love you!) refuses to sign her final permission slip for her surgery until she has dealt with this final piece of her life as a man. Forced to deal with the teenager, Bree flies out to New York with the intention of returning him to his parents. Alas, his mom is dead, and he ran away and became a street hustler. Mistaking Bree for a well-meaning church social worker, Toby (Kevin Zegers) has no clue of his relation to Bree as they embark on a road trip to bring him back to his stepfather.

Cross-country road-trip movies are obviously a well-worn genre. Transamerica continues with the formula, with its bickering characters, shifty hitchhikers, colorful locals, and secrets slowly revealed and confronted. But heck, you have to admit having a transgender woman as one of the passengers on the journey adds a new spin.

Felicity Huffman is fabulous as a person who is not comfortable in her own skin. Her body language is notably self-conscious, and her uber-feminine mannerisms just make her stand out even more. The makeup artists do a fabulous job of making her look not… quite… right: Her foundation is an odd skin tone, her lipstick is poorly applied, and her ears are a different color than her overly-powered face. She’s still learning, and through the film, you see her slowly blossom as her character nears her final emotional destination (culminating in a memorably real crying scene).

Despite the fact that it is a pretty predictable road movie, Transamerica still manages to be a breath of fresh air by introducing us to a character that we really don’t see represented respectfully in the movies. Plus Felicity Huffman’s performance goes beyond stereotypes, making the character of Bree come to life. Through the laughter and the tears, she wins the audience over, becoming probably one of the more unusual and endearing heroines you’ll see on screen.