As you watch, you can’t help feeling like you’re seeing a rip off of The Sound of Music, but in fact this film is a vestigial version of the classic.
By Jenniferon October 27, 2013
0 Comments
Our Rating 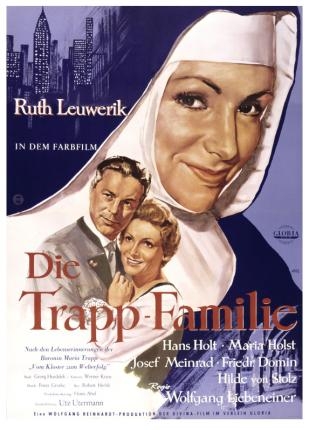 Wow, who knew The Sound of Music was preceded by a weirder, crappier movie about the Von Trapps, called The Trapp Family? I’m still not entirely sure how this movie made it into my hands, but I can see why so few have had the pleasure of seeing it. The musical outbursts are strange and random, the sound is out of sync with the tape, and weirdly, the Trapp family (and Maria in particular) is insane.

The film begins with Maria (Ruth Leuwerik), whistling, chomping on an apple, and sliding down the banister at the abbey. Obviously she’s a misfit among the prim and proper nuns, but in a new development, she also teaches a class of orphans. They punch spastically at the air when they have the right answer instead of just raising their hands like normal kids. The Reverend Mother calls Maria out of class to inform her that she’ll be the new governess to Captain Trapp’s seven children. Maria swallows hard, and asks, “Is he bossy?” I don’t know what she’s worried about. Maria’s bossier than Bossy the cow.

Upon arrival at the Trapp estate, we relive the whistle scene which introduces the children to Maria and the audience. The only difference is that the children have all the wrong names and faces. A servant tells Maria that the Captain could secure himself a wife, if only he had confidence in her. Hmm, confidence. Where’ve I heard that word before?

Apparently the Captain is confident in Maria, because he does go away to visit Baroness Schraeder, er, Princess Yvonne. She’s a round-shouldered woman, slightly doughy around the edges, and possesses none of the smart appeal of Eleanor Parker… but then again, our Captain (Hans Holt) possesses none of Christopher Plummer’s stern, smoldering sex-appeal either.

While he’s away, Maria has play clothes made for the children, which they break in by rolling around in the grass. Okie-dokie, then. A thunderstorm sends the children running to Maria’s room, but instead of “My Favorite Things”, they burst into the “Hop Hop Hop” song. Um, yeah. Eventually the kids learn to act like real children, and when their father arrives home, we find them playing “submarine” in their uniforms out in the yard. At this point, the youngest girl decides to hose them down to make it all more authentic. I must say that the tree-climbing scene in The Sound of Music is much more sensible.

The Captain never really gets that angry about any of this, and when Princess Yvonne (vixen that she is) tells Maria that the Captain is falling in love with her, there is no retreat to the abbey, and no visit from the children. The Captain confronts both women immediately, and the Princess is chucked. The Captain and Maria spend far more time together in this movie, and in this sense their love story has a stronger foundation. The Captain is kinder and more talkative, but he’s also a big wuss, and an even bigger bore. It’s Maria who calls all the shots, and unlike Julie Andrews’ Maria, she comes across as pushy and unhinged instead of strong and level-headed.

After the Captain and Maria marry, they actually have a baby together, and instead of fleeing the Nazis at the festival, they lose all their money and move to America. There, Maria does her best to drive them all to fame and fortune as a singing troop, and we get to hear their goofy renditions of songs like “Oh Susannah”. In the end, they buy an old farmhouse, which I assume they convert to an inn… or something. The film closes with the children singing and manically doing carpentry. Imagine the Seven Dwarfs taking part in a barn raising, and you’ll have a pretty clear picture of the final scene.

As you watch, you can’t help feeling like you’re seeing a rip off of The Sound of Music, but in fact this film is a vestigial version of the classic. It’s flimsy and unmemorable, yet somehow fascinating. It makes you appreciate the artistry that makes The Sound of Music so timeless, and leaves you wanting to watch the original yet again.