The film has a lot going for it, which makes the overall “What the…?” climax a bit of a letdown.
By Lindaon September 29, 2013
0 Comments
Our Rating 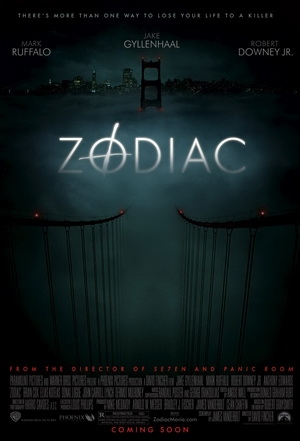 David Fincher’s Zodiac is a curious film. An extremely earnest recounting of the serial killer murders in the Bay Area in the late 60s and early 70s, the film is chock full of facts, names, and events that I can only assume are as true to life as possible. Running over two and a half hours, Zodiac is nothing but thorough. Evidence is weighed, letters are received and pored over, threats are made, and dread of Bad Things To Come piles up over and over.

But then… what? As someone who went into the film knowing nothing about the case, I was left empty handed at the end, as a relatively exciting thriller eventually petered out, just like the trail leading to the killer.

Jake Gyllenhaal plays Robert Graysmith, an editorial cartoonist (with a Boy Scout demeanor) for The San Francisco Chronicle. One day he happens to be in the staff meeting where a handwritten letter to the editor is read, from a mystery-person identifying himself as the killer of two teenagers in lovers lane. The killer reveals facts not known to the public about the case, and calls himself Zodiac. Zodiac demands front page placement of a page of cryptic code, and has sent the same letter to two other major newspapers in the region, with the threat of more bloodshed if they don’t comply. The papers blink, and Zodiac begins his frightening grip on the media and the public. As more murders are committed, and Zodiac keeps writing, the police, led by Inspector David Toschi (Mark Ruffalo) hit dead end after dead end. Eventually Graysmith’s curiosity gets the better of him, and he starts to do his own investigations.

That sounds all good on paper (or in Graysmith’s eventual book form), but there is so much detail, so much evidence, so many witnesses, and so many investigators, that it all starts to swarm together. Scene after scene begins with subtitles like, “Two hours later,” “Four weeks later,” “Three years later, October 12, 1972,” etc. Every scene. Let’s just say a lot of scenes can fit into over two and a half hours.

The film has a lot going for it, which makes the overall “What the…?” climax a bit of a letdown. Robert Downey, Jr. steals all of his scenes as the obsessed reporter covering Zodiac for The Chronicle. He’s cool and hip, and slowly his obsession with a killer that seemingly can’t be caught starts to unravel him. Anthony Edwards has nice moments as Toschi’s partner, and Brian Cox gets a hammy cameo as a psychiatrist that the Zodiac requests for call-in conversation on a talk show.

The fact that the Zodiac killings actually happened also makes the whole vibe of the film inherently more chilling than a regular serial killer film. Can you even imagine if the news stations read aloud an anonymous threat that a killer was going to shoot out the wheels of a school bus, then pick the kids off one by one as they came “bounding” out of the bus? Dear lord.

But, if Zodiac were not based on a true story, the plot of the film would be fair game to be picked apart for having too many characters, no true climax, and no satisfying ending. So I feel kind of bad to say that I’m afraid all of those nitpicky problems alas do exist. Despite all of the potential of an above-average thriller, Zodiac, by trying to tell too much, ends up not really telling us anything, leaving the audience slack like a deflated balloon after the closing credits.