Is five years enough distance to make a great movie about the World Trade Center attacks?
By Lindaon October 27, 2013
0 Comments
Our Rating 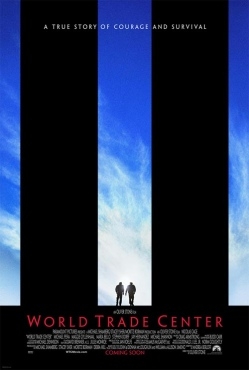 I had two fears going into this movie. One would be most obvious: Was I ready to see a dramatization of September 11th, 2001, and did I even want to? (I had skipped United 93 in the theaters.) The second was my fear of Oliver Stone. In my opinion, his movies are the equivalent of someone screaming and pounding their fist on a table and occasionally reaching across and slapping you in the face to get a rise out of you. In other words: not subtle. Would he screw this one up?

Stone tells the story of two New York Port Authority policemen who are among the first responders to the World Trade Center attack, and ultimately get buried alive in the rubble of the collapsed buildings. Nicolas Cage, so subdued he is almost comatose, plays John McLoughlin a family man with 4 kids, a wife (Maria Bello), and 21 years of service under his belt. Michael Peña is newbie Will Jimeno, who seems practically like a wriggly puppy compared to his elder, and his flashbacks to his playful and passionate relationship with his wife (Maggie Gyllenhaal) reflect that. But once they get buried in the rubble (after very well-done scenes of the initial confusion, disbelief, and panic surrounding the WTC), the movie can only focus on the faces of the trapped men as they wait for rescue.

In a supporting role, Michael Shannon plays an ex-Marine, so moved by the events unfolding on TV that he goes to the barber, gets a crewcut, dons his fatigues, and goes to New York to help. This is all admirable, but more noticeable is that he is portrayed with steely eyes and square jawed determination, almost robot-like. Compared to the frazzled and exhausted NYC firemen, police, and aid workers on the scene, he is like the Terminator showing up. All I could think was how this guy was a walking metaphor for what America would become (in the eyes of the world) over the next few months, as worldwide sympathy slowly turned away from the US.

World Trade Center is a very careful movie. Almost too careful. I don’t know what the real men portrayed are like—I’m sure McLoughlin and Jimemo are good, solid men. But my impression is that Stone was so careful not to dramatically embellish (and get reamed for it) that we are left with two good men that aren’t necessarily the most cinematically compelling men, despite surviving their truly harrowing ordeal. That is the problem with dramatization. It is, in a sense, fictionalizing scenes for the entertainment of the audience. But when you stick too closely to real life, in this case, maybe it is not as involving as the real thing.

Is five years too soon for a movie like this? My friend pointed out that the event is still so raw that the story is still too close that people aren’t ready for a big-screen interpretation. Stone takes these men’s stories (and the stories of their wives) so very literally that he tiptoes around them. Is the film loyal and respectful? Yes. Is it as dramatically compelling as simply talking to the real people? Probably not.

Maybe we aren’t ready for feature films about 9/11. Maybe we need to continue to sort through the real-life information with documentaries. The emotion is obviously there—it was only when Stone interspersed real news footage into scenes that my chest involuntarily tightened into that familiar shock and panic. But next to the real thing, the fictionalized drama fell disappointingly flat.