Widows puts an amazing ensemble cast into an intriguing, flipped-on-its-head heist plot, adds a dose of righteous female-badassery, then attaches an acclaimed an Oscar-winning director, and it is… a snoozefest. 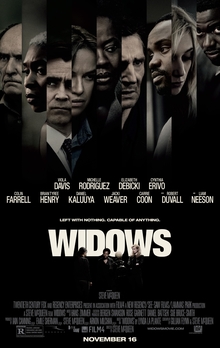 In the first few minutes of Widows, a heist goes wrong, and the four criminals are killed by the cops. The ensuing story is (refreshingly) about the mess that those crooks left behind.

Veronica (Viola Davis) is the wife, now widow, of the ringleader crook Harry (Liam Neeson). They had a deep and true love as evidenced by flashbacks of lots of wet kissing–mouth, fingers, head. Harry, it appears, was Veronica’s sugar daddy. In her gorgeous waterfront Chicago apartment, she and her little white dog are at a loss, especially because it doesn’t seem that she has any job, despite that we’re told she is the representative of a teacher’s union. If losing Harry wasn’t bad enough, a gangster-turned-political candidate (Brian Tyree Henry) breaks into her home demanding the $2 million that Harry unsuccessfully attempted to steal in the heist. With few minced words, Veronica is told the SHE needs to get him the money Harry promised, or you know, it’s bullet-in-the-head time.

With the help of a magic handwritten notebook that Harry kept (no silly flash drives for him!), Veronica decides to pull off Harry’s next heist herself, to the tune of $5 million dollars. This would take care of the debt, and with the help of the other widowed women who lost their men in Harry’s foiled robbery, the leftover money would take care of her (and the other widows’) financial issues for good (well, for now).

This all sounds great in writing, especially as the other women are played by Michelle Rodriguez (as a mom and shop owner), Cynthia Erivo (as a babysitter and beautician), and Elizabeth Debicki (who goes from abused wife to escort). Toss in a crooked Chicago political family (Robert Duvall and Colin Farrell as his heir-apparent), plus a mom-from-hell played by Jacki Weaver and an unhinged Daniel Kaluuya as mobster, and you have a jam-packed cast of talent. But director Steve McQueen (whose last film, 12 Years a Slave, won the Oscar for Best Picture) tries to be arty and dramatic instead of thrilling, and Widows ends up being…. sloooooow.

OK, so I fell asleep. For about 10 minutes. I only woke up because someone was being stabbed.

A lot of Widows just doesn’t add up, and head scratching plot holes abound. Viola, we all know, is a badass. But would her character be so confident and knowledgeable about pulling off a very high-stakes heist despite claiming innocence about her husband’s “work”? She and the other women are a veritable Oceans 4 of skills when it comes to scaling walls, reading floor plans, and finding codes, all with less than a week to pull it all together. Of all the characters, I found Elizabeth Debicki’s Alice most intriguing. She admits when she doesn’t know how to do something, like, you know, drive a car or buy a gun, but her methods of finding out creative solutions were as believable as they were crafty.

By the time the heist occurs at the climax of the film, it is a welcome piece of action. But it is too little too late. When you have a cast like this assembled for a movie, you know that they will find moments to shine. But that should be because of the script and direction, not in spite of it. Early buzz has Widows winning a bunch of year-end awards, but frankly I don’t see it.