This enormously entertaining Western may be fictionalized, but like several people told me, it is based in truth.
By Lindaon July 25, 2014
0 Comments
Our Rating 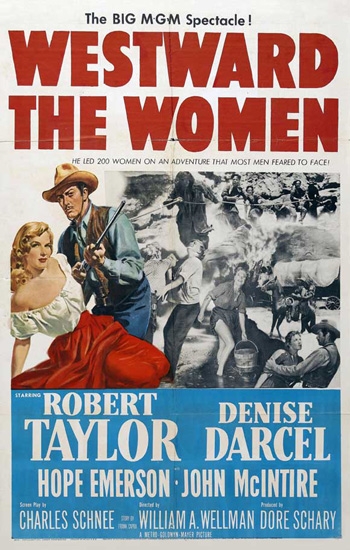 Out in the Old West, there was a disproportionate amount of men to women. The men came seeking adventure and fortune, and the few women that followed them were often “business ladies” of their own sort, if you know what I mean. By the time these men wanted to settle in the West, pickings were slim for proper ladies that would fit their ideal of a traditional wife and mother.

Westward the Women introduces us to Roy E. Whitman (John McIntire) and old-school gentleman that is a bit rough around the edges. He founded a settlement in California, and like the 100 or so scrappy men that live there, plans to stay for good. But the problem is that there are very few, if any, “decent” women that could be potential wives to these men.

So Whitman, along with his guide-for-hire Buck Wyatt (Robert Taylor), travels to Chicago to recruit 150 good women (no prostitutes!) to come out West to marry these men. The journey will be rough, they are warned, and they are bluntly told that the reason that 150 women are recruited for 100 men is that one out of three of them (!) will die on the journey. These statistics prove to be pretty accurate.

It is pretty fantastic that ANY movie, whether from the classic Hollywood era or modern times, has a cast not only almost entirely of women, but of 100 women! Several characters get a chance to shine, especially Denise Darcel’s saucy French minx Danon (whose questionable past causes Wyatt to resist her attentions), and Hope Emerson’s burly and butch Patience, who becomes a gruff mother hen to the tribe. There are schoolteachers, widowed immigrants, sharpshooters, and sensible ladies, and several of their stories are quite moving.

What I loved about Westward the Women was that I knew nothing about it going in (I had never heard of this film, and it is on DVD for the first time), and was completely enthralled with the journey. The unusual tribe of travelers face not only challenges from the harsh landscape (mountains, deserts, rivers, and such), but from amongst their ranks as well (their handful of male escorts dwindle as they get booted by Wyatt’s strict rules against hanky-panky and disrespect by the men toward their charges).

When you think that the women’s reward at the end of the journey kind of sucks (the motley men of the town are an unpolished bunch), the story still has a feminist bent as the men are told they need to shape up to earn the right to a wife. The women chose to make the journey, and it’s the women themselves that get to choose their men. You go, girls!