Wishful Drinking: Carrie Fisher tells all! (and boy, does she!)

Carrie Fisher, talented a writer as she is, knows that she will be haunted by a certain character that she first played onscreen when she was a mere 19. Who knew that the Star Wars franchise would be arguably the biggest pop-culture phenomenon film series of modern times, and that Princess Leia, a chick sporting a weird cinnamon-bun haircut would be her most instantly recognizable association. Well, if you are Carrie Fisher, you may as well work with this blessing/curse. After all, she says, George Lucas legally owns the rights to Fisher’s likeness (yikes!).

Wishful Drinking, Fisher’s one-woman autobiographical stage show, feels (for fans especially) like a chance to get to hang out with this fiercely funny and admittedly scarred woman one-on-one. The stage is set up in cozy living room style, with a couch, chair, and table, and Fisher pads around the stage barefoot. And if you are in the front rows, expect to get showered with glitter, picked on, and yes, occasionally addressed or mocked throughout the show. And one lucky person gets pulled on stage for a cute visual stunt (the guy at our show got on his knees to kiss “Princess Leia’s” hand, since he had the opportunity, while his wife heckled him from the audience). 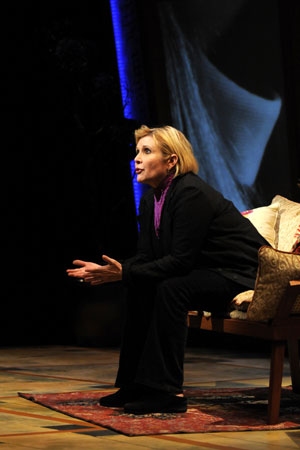 The first half of the show (there is one intermission breaking up the two hours of performance) is the lightweight part. Well, even though she opens with a story of waking up next to her dead gay friend a few years ago, and it was just another example of the bizarre scandal-like things that have happened in her life literally since the day she was born. In hilarious detail, Fisher explains (with a sort of classroom chart) how truly messed up it is, growing up in a Hollywood family (mom is sweetheart Debbie Reynolds and dad is crooner Eddie Fisher). Throw in some Liz Taylor, a fetish for Asian women, gay husbands, and, yes, singer Paul Simon… and you get some idea of this complicated generational family tree.

As the show continues, there are many laughs at the expense of Star Wars and George Lucas (who claimed, “There are no bras in space!” leaving poor Carrie literally strapped down with tape under her costume) as well as the Hollywood scene in general. But as the show moves on, it takes a tone of seriousness, despite her self-effacing tone. It took a long while for Fisher to get diagnosed as manic depressive (also known as bi-polar). She has a wild history of highs and lows… and lots of lots of alcohol and substance abuse.

She goes into her stormy relationship with Paul Simon—fights, break-ups, getting together, breaking up—and jokingly adds, “If you can get Paul Simon to write a song for you… DO IT!” Then she plays (illegally, she adds), part of his song “Hearts & Bones” and explains that he and she were the “one and one half wandering Jews” (now the song makes me want to burst into tears even more than it already did).

Things are better for Fisher now since she has found a balance of therapies that work for her, including Electro Convulsive Therapy. She jokes that she’s made it into the medical textbook “Abnormal Psychology”. There she is… at the beginning of Chapter 3, “The Biology of Bipolar Disorder”, there’s a photo of her as Princess Leia. She is a sort of “poster child” for bipolar disorder, a curious honor. But by not hiding her mental problems, she does bring a face to a disorder that affect thousands of people. Wishful Drinking is a treat for fans of Star Wars and Hollywood gossip, but Carrie Fisher’s storytelling sneaks up on you, leaving you with the sobering tale of one woman’s lifelong battle to identify and control her demons.