If you’re a crass, foul-mouthed, sexist who delights in potty humor, then Baby on Board will be right up your alley. Eight out of eight slices of Moviepie, man, enjoy! If that’s not how you choose to identify yourself, then you will probably be just as horrified by the movie as I was.

By Jenniferon February 8, 2014
0 Comments
Our Rating 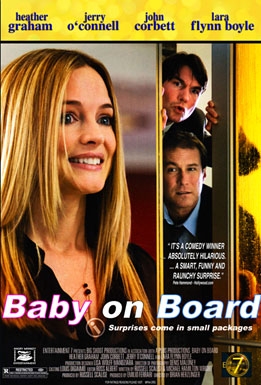 Angela (Heather Graham) and Curtis (Jerry O’Connell) are an up-and-coming young couple who have spent most of their married life focused on their careers. Curtis is a successful (if amoral) divorce lawyer, and Angela has just pitched a new perfume for pregnant women to her scary battle-axe of a boss (Lara Flynn Boyle). Parenthood is the next obvious step in their relationship, but if their closest friends are any indication of what children can do to a marriage, then perhaps that’s territory best left unexplored. Danny (John Corbett) has turned into a boorish, selfish womanizer with a propensity for getting drunk and publicly berating his understandably miserable wife (Kate Finneran). Could Angela and Curtis actually wind up like them one day?

Sadly, Curtis and Angela have no time to ponder their family plans because, (wait for it) she’s already pregnant! And then Curtis decides that she’s been fooling around and that the baby isn’t his, because in addition to being charming, he’s also really, really smart and he always uses two condoms, which, according to Danny, means “infinite protection”. Apparently they were all playing hooky when the lady from Planned Parenthood visited their junior high and explained that two condoms are actually worse than one when it comes to breakage, because everyone in the movie seems to think this is a perfectly sound practice.

Curtis then moves in with Danny, who attempts to mentor his younger friend. Know what’s better than an evening with the old ball and chain? Strippers! At home! And beer – beer’s really good! And if you really want to live it up, hit the massage parlor (you know the kind I mean)! The worst thing about Danny is that he’s not even a lovable bad boy, like, say Tommy Lee, or, I don’t know…Bret Michaels. He’s just this really bitter, entitled pig who uses women but seems to have no affection for them whatsoever. Honestly, it was kind of nightmarish seeing John Corbett in a role so beneath him. It made my brain hurt.

While Curtis carries on in the manner of an over-funded frat boy, Angela throws herself into her work and seeks comfort in the company of her obstetrician. This only fuels Curtis’s suspicions of infidelity, but what he doesn’t know is that the obstetrician is a happily partnered gay man. See? It’s all a silly misunderstanding! All we need is for Danny to have an epiphany, make a big speech about the beauty of marriage, and bring these two crazy kids together in time for the birth of their baby.

Ostensibly, the movie doesn’t sound half as offensive as it actually is, and it’s more than the image of Danny jerking off in the kitchen he shares with his wife and children that repelled me. I think it’s offensive to spend the duration of a film watching a bunch of tools. None of the characters are ever more than a plot device, and while Angela may be a halfway sympathetic heroine, she’s the butt of so many pregnancy jokes that you begin to wonder if she can be called a heroine at all. It seems as though everyone in the film falls victim to jaded, mean-spirited writing, and as an audience member, I felt a little victimized myself.