X-Men: Days of Future Past

Now THIS is what a blockbuster summer movie should be! 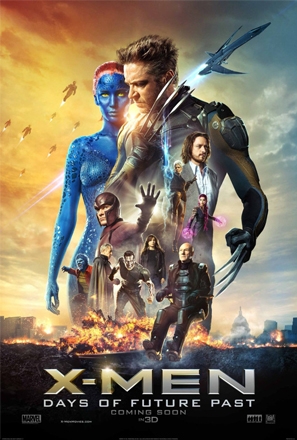 The formula is so simple – great actors playing great characters in a great film with great effects and a really great screenplay – that’s it’s amazing so many films get it wrong at this time of year. But X-Men: Days of Future Past gets it so very very right.

Jumping back and forth in time, and featuring the casts of the assorted films in the X-Men series, Days finds Professor X (Patrick Stewart), Magneto (Ian McKellan), Wolverine (Hugh Jackman), Storm (Halle Berry) and company stuck in a dark, dystopian future where robotic, morphing killing machines called Sentinels have essentially eviscerated mutants all over the planet. Forced to hide out, and eking out a constantly on-the-run existence, the X-Men decide the only way to prevent the complete collapse of humanity is to go back in time and change the past to save the future.

Wolverine is enlisted to make the journey back to 1973, and the Paris Peace Accords, to find and reunite the feuding mutant factions, where a young Xavier (James McAvoy), doped up and dejected, is on one side, Eric (Michael Fassbender) is on the other, and Raven/Mystique (Jennifer Lawrence) is cartwheeling the fine line between good and evil. Together, the rag-tag group must stop the Sentinels from being unleashed on society, and thwart the efforts of their nefarious inventor (Peter Dinklage), who delights in experimenting on (and dissecting) any mutant he can find.

Blessed with a rich, multi-layered and pretty-seamless plot, Days unfolds like an engrossing novel, with nary a throwaway scene or drawn-out sequence anywhere to be found. The tried-and-true themes of alienation, fear of the unknown and different, and coming out (as a mutant, that is) are once again present, yet everything feels fresh and new. The effects are, not surprisingly, stellar; the fight sequences – both low-tech and high-tech – were terrific; and there’s a strong heart beating beneath all the proceedings.

Seeing both the older and younger versions of so many by-now-beloved characters together in one film is immensely satisfying – and, at times, downright moving (yes, I cried). The cast is almost-across-the-board wonderful (Jackman’s charming, McAvoy heartbreaking, Fassbender appropriately magnetic), save for Berry, who literally has about two lines and virtually zero purpose.

My only criticism is that the new mutants – including Warpath (Booboo Stewart), Blink (Bingbing Fan) and Bishop (Omar Sy) – kind of get the short end of the character-development stick, appearing without any context or explanation. I’m still not even sure what Warpath’s power actually is. Of the newbies, only the 1973 version of Quicksilver (Evan Peters) is rewarded with a key role, and it’s a winner. Easily one of the most entertaining chunks of the entire film.

Despite a running time of more than two hours, X-Men: Days of Future Past zips by (I didn’t check my watch once!), and I would have happily watched another hour or two. My recommendation is to head out and experience this kick-ass summer popcorn flick as it was meant to be experienced: on a big screen, with a packed audience. You won’t be disappointed.

As home theaters creep closer and closer to the quality of a movie-going experience (except you can pause a film, each cheap food, and look at your phone and talk all you want), Digital HD is the way to go if you have the technology. The availability of X-Men: Days of Future Past on Digital HD actually beat the Blu-ray/DVD release to the punch by a couple weeks, giving those who prefer HD downloads a distinct advantage to catch this flick from the comfort of their own couch. Among the iTunes Extras on the Digital HD release are a handful of deleted scenes, including an alternate ending, with optional commentary by director Bryan Singer; there is a gag reel, which is surprisingly fun; and a gallery of autopsy black-and-white stills of Mutant Experiments, Blueprints of creations from Trask Industries, and images of Trask Industries’ Sentinel Construction. Finally, there is a behind-the-scenes “Kitchen Sequence” featurette, where Mystique (Lawrence), Charles (McAvory), and Beast (Hoult) discuss plans to assassinate Trask, in a scene that Singer ultimately decided didn’t work.

Apparently fans were clamoring for the cutting-room-floor version of X-Men: Days of Future Past (The Rogue Cut), wherein a different hero shows up to save the day, and a few plot holes were filled. This version is 17 minutes longer, and, honestly just feels… longer. I don’t think adding Rogue back in makes it a better film, in fact, she seems a bit tacked on. She is not mentioned until 1 hour 30 minutes in, and we don’t see her for another 10 minutes after that. Apparently, in the future she has been lying on a slab for 10 years back at Xavier’s mansion, so she gets a quickie rescue in order to give poor Kitty a break (since Kitty is bleeding all over the floor while keeping Wolverine’s head in the past). Let’s just say, I don’t think this cut adds anything to the film, except for a better explanation as to how the scary Sentinels found the future versions again so fast this time. Bryan Singer (along with editor John Ottman) even admits in the commentary that parts of The Rogue Cut were a little clunky, and maybe didn’t help the film. Honestly, out of the 17 minutes of footage, there was maybe 5 minutes total that I even noticed as new. The rest was negligible, or for diehard, frame-by-frame purists only.

Viewers do get additional extras as well. The second disc includes 52 minutes of featurettes (“Mutant vs. Machine”) that you can binge on, as well as 30 minutes of behind the scenes interviews (“X-Men: Unguarded”) with the cast and crew. There are galleries of storyboards, concept art, and costumes. And if you can’t get enough, the cardboard sleeve packaging folds out–a gimmick just to have a nice double-wide cast montage photo.