You can call me Harry Poseur 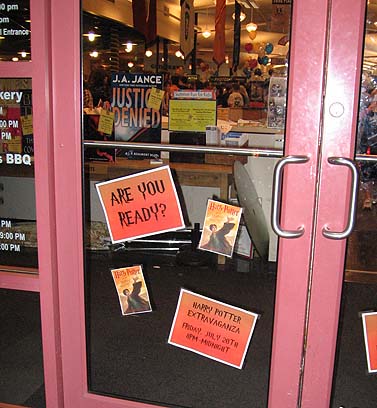 How could you not be caught up in the frenzy of Harry Potter-mania in this last week? Now, I, for one, have only read the first book, but I have seen all the movies. Hey, now… don’t think that I didn’t hear you scoff! OK, so I did roll my eyes at movies #2 and #4, but I did quite enjoy The Prisoner of Azkaban (though, admittedly, it took me four sittings to get through… I would last 45 minutes, then fall into a deep slumber on the couch), and the latest, The Order of the Phoenix, wasn’t half bad. I’d almost say that the presence of “Luscious” Malfoy (Jason Isaacs) might have even helped, um, “stir” my interest in finally picking up more of the books to get a better handle on what the heck was going on.

But as a fan of all things literary in general, I wasn’t going to pass up joining the party for the biggest literary unveiling of ANY kind of modern times: The release of Book #7, aka The Final Harry Potter Book EVER, aka Harry Potter and the Deathly Hallows. So, for the eve before that fateful official release date of July 21st, I hooked with a group of hardcore non-wizard-like Potter fans (who claimed that in my presence they were all only half-Muggle… because no one could be more Muggley than me). We caravaned to the Lake Forest Park Third Place Books, where one of many many citywide Harry Potter release parties was taking place. Third Place Books is an awesome new and used bookstore, situated openly next to a large community mall space with a stage, a big chess board, some food establishments, and the mouth-watering Honey Bear Bakery. We knew they’d have a great shindig. 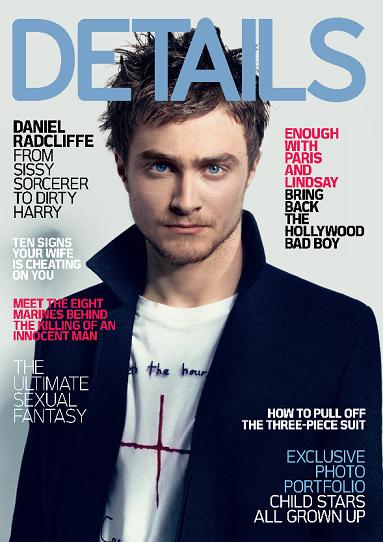 The parking lot was unsurprisingly packed when we arrived at 9:30pm. As soon as we pulled open the decorated double-doors and were hit by a blast of noise, I knew I was out of my league. There were kids dressed up. There were adults dressed up. There were groups of teens sitting cross-legged on the floor drinking Full Throttle while reading Book #6 to pass the time. There was a Fortune Telling Room, there were quizzes, there was a magician, and even the SCA showed up to whack each other with swords for the entertainment of all. My group split up, as one went to stand in a massive line up adults queuing up for coffee, and a couple of the others went in search of the new Details magazine with Daniel Radcliffe on the cover, where he is looking decidedly hunky and un-Harry-like. (Alas, the magazine was sold out, apparently within the whole shopping complex. Not that we checked. Whatever.) 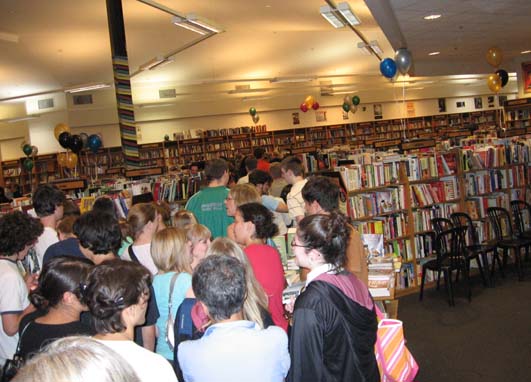 But the masses were clearly biding their time waiting for midnight. Even though everyone had a ticket showing that they had purchased the book in advance, people still began lining up around 10pm. The electric buzz in the air was undeniable, so much so that the temperature in the building built up to a balmy 80 or so degrees. This Muggle had to take a couple breaks and stand outside in the parking lot where there was a refreshing cool drizzle and a handful of covertly smoking adults. The magician tried to entertain people up until the stroke of midnight, to no avail. The crowd was swarming restlessly.

And here, my dear readers, is the sound of midnight. At 26 seconds into this clip, you can clearly hear when they released the hounds… or the books, rather. Kids, teens, and adults ran screaming through the aisles, yelling, “I GOT IT!!! I GOT IT!!!” Two teenage girls breathlessly flipped open the front of the book and squealed, “The first word is… the first word is… THE!!!!”

I have to say I was impressed at the efficiency of the bookstore employees. The line of over 1,500 people got their hands on the tome within 35 minutes. The bookstore folks kept their spirits up, despite the chaos, and only started to look frazzled as the evening was wrapping up. One redheaded employee in an academic robe sheepishly admitted, “No, my name is not George. It’s not even Fred. My name is Steve.” As my cohort S and I scooted forward in line, we fell into a chat with a woman and her kids in front of us. The mom asked us if we were each going to get a copy of the book so we wouldn’t have to fight over it at home. I said nonchalantly, “Oh, no, we’re just getting one for her. I have only read the first book, so I won’t be reading it anytime soon…” An eavesdropping 50-something woman snapped her head around to stare at me in shock and disgust, so blatantly appalled at what I just said that I had to laugh and point at her. “THAT is the look I’ve been expecting all evening!” A Harry Potter poseur exposed! 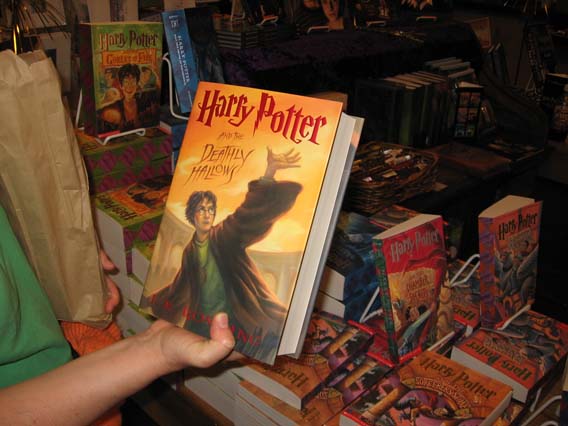 Still, I’m glad I went. I’m current on all the movies so I have a rough idea of what is going on through Book #5. Plus over pre-PotterPalooza margaritas, I had a major Book #6 spoiler accidentally spilled to me (as a result of me saying that I liked Snape… he wasn’t so bad, really, I had said). Ooops. But one of these days I’ll buck up and tackle the series. This Potter Poseur is quietly tiring of being ostracized by her friends and co-workers. No, I’m not caving. Truly, such a successful, popular and acclaimed series is most likely actually GOOD, so I’ll be looking forward to it. Cheers, and thanks for your understanding and tolerance. 🙂 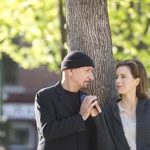