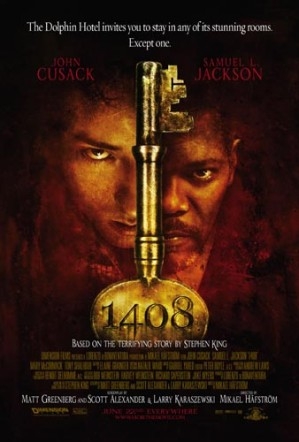 The plot of the horror film 1408 is quite simple: Paranormal writer John Cusack hears about haunted room 1408 in the Dolphin Hotel. Hotel manager Samuel Jackson says, “It’s an evil fucking room.” John Cusack checks in anyways, and promptly loses his mind. That is all there is to it. After all, the film is based on a short story by horror-meister Stephen King.

As you may imagine by that premise, much of the film literally takes place in one room, as the evil room plays with John Cusack’s mind, picking at his own personal paranoias and past traumas. You see, despite having written many books about haunted hotels and inns, he’s never actually experienced any of the paranormal thrills that he writes about. So when minor things begin happening, like a used toilet paper roll appearing perfectly folded again, he is more than a little thrilled. But when his digital bedside clock suddenly resets itself to 60 minutes, and starts counting down (while blaring the song “We’ve Only Just Begun” by the Carpenters, which has never sounded so menacing), well, he suddenly starts to get nervous.

Despite having a rather good build-up, and some effectively memorable moments (like Cusack attempting to creep to safety on a ledge; or Cusack flipping out, screaming at the coy distant figure of Jackson, when it turns out he is actually yelling at the contents of the mini-fridge), I couldn’t help but feel that 1408 was rather… slight. It doesn’t help that it has a fake-ending that goes on way too long, that feels cheap and expected. The movie didn’t offer many surprises, and I ultimately really wanted to like the film more than I did.

The two-disc version of 1408 actually contains a full director’s cut of the film in addition to the theatrical cut. I ended up watching the whole film again (this time the director’s cut), expecting answers, and if anything, an improved viewing experience. It turns out that director Mikael Håfström was actually not disappointed with the version that made it to the big screen. He actually agreed with some of the cuts that were made, including nixing the extra backstory with the Cusack character’s father. The only worthwhile difference between the two versions worth mentioning is the ending. The ending of the director’s cut is quite different, and I personally think it is more true to the tone of the story. Does it make it a better film? Only a little. Unfortunately it is not enough of a difference to make the film stand out from other so-so Stephen King adaptations.