Director Pen-Ek Ratanaruang has created a strangely beautiful ode to the relationships that form completely by circumstance, in a quiet, slow-moving film that is sometimes marked by shocking bursts of violence.
By Lindaon October 27, 2013
0 Comments
Our Rating 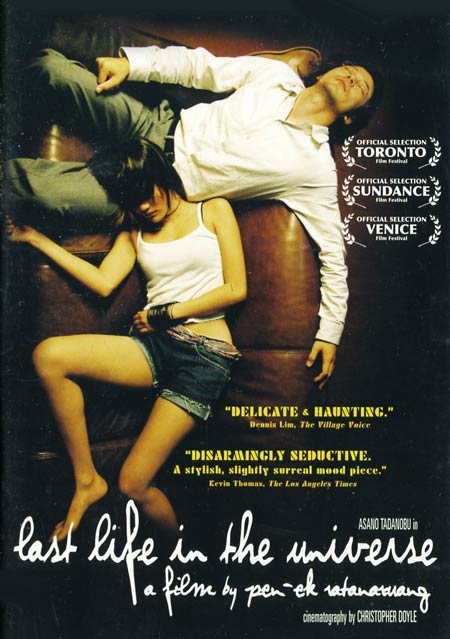 Kenji (Tadanobu Asano, Twilight Samurai) is a Japanese library clerk in Bangkok. His work environment is as orderly and tidy as it is uninteresting, with fluorescent lights seemingly washing out all the color and life from the room. His own apartment reflects an even more excessive anal-retentiveness, with careful stacks of books, and items perfectly organized in his fridge. So it is not too surprisingly to see Kenji carefully setting up a noose in which to hang himself, when suddenly his loud and obnoxious brother bursts into the apartment and shakes up his life in unexpected ways.

Turns out that the yakuza are after his brother, and after a violent confrontation, Kenji ends up fleeing his apartment. By chance he crosses paths with a young woman whose life has also been turned upside by sudden violence. Noi (Sinitta Boonyasak) is bereft over the loss of her beloved sister in a freak car accident, and next thing you know, Kenji joins Noi in her retreat from the city to a formerly beautiful, overgrown beach house.

Cinematographer Christopher Doyle (who has lensed such visual masterpieces as Hero and In the Mood for Love) said that the house is pretty much the third main character in this film. It dominates the screen with its nooks and crannies filled with the past and memories, as Kenji and Noi retreat from their own tragedies. Kenji, of course, starts to clean, and Noi slowly comes to terms with her grief.

Luckily, Last Life in the Universe is not a typical romance, or gangster film, for that matter. It is more of a character study of two completely different people who find each other in time to survive that chaos in their lives that would otherwise destroy them. It is visually sumptuous, and is a strangely lovely and life-affirming film.