8 Women is the kind of movie that you think you can sum up in a sentence—but it packs more surprises than you thought a movie like this could handle. Its quirky themes include murder, betrayal, deception, lesbianism, pregnancy, incest, slapstick comedy, and some of the most inexplicable musical numbers I’ve ever seen. Interested yet?
By Ericon November 5, 2012
0 Comments
Our Rating 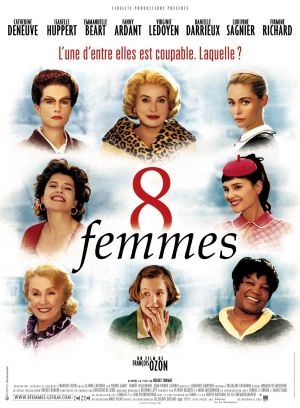 The setup goes something like this: Six women live in a mansion with a man named Marcel. There’s Gaby, his wife; Catherine, his younger daughter; Augustine, his sister-in-law; Mamy, his mother-in-law; Louise, his maid; and Chanel, his housekeeper. One day in the dead of winter, Marcel’s older daughter, Suzon, comes home from college for break. When his younger daughter goes to wake him up and to greet her, she finds him dead in his bed with a knife sticking out of his back. After going into hysterics for a while, it occurs to all of the women that the killer must be one of them. (In case you’re wondering, the 8th woman is Marcel’s sister, who turns up soon after.)

The movie quickly takes on a classic “Everyone’s a suspect!” structure, but it’s anything but predictable. As the movie unfolds, revelation upon revelation about all of the characters build upon and overlap each other. Every question answered by one person reveals a secret that throws suspicion on another. Every woman turns out to have a motive. It would not only be unfair, but pointless for me to divulge any of these secrets, because they’re not the point. The point is to enjoy the delicious dialogue which skillfully takes us this way and that, eventually doing more than simply bringing us closer to a solution. What we end up getting is a vivid portrait of a household that seemed shiny and perfect when we were introduced to it, but as more and more secrets and lies are uncovered, we see just how deeply it is anything but.

One of the movie’s most remarkable feats is the fact that it establishes eight vivid, memorable female characters. There’s no scrambling to remember what name goes with what woman, and no confusion trying to figure out how many women are in the room and which ones are missing. All of the actresses give marvelous performances. Catherine Deneuve, playing Gaby, strikes just the right note of comedy posing as dignity. Fanny Ardant is a guilty pleasure as the smug and bitchy sister, who comes across as if she’s working everyone else, but is actually as in the dark as they are. And this has nothing to do with acting, but Suzon, played by Virginie Ledoyen (The Beach), looks like the most adorable cross between Audrey Hepburn and Natalie Portman.

So, is there anything wrong with this movie? Just one little thing: Though the film has several musical numbers, it’s not really a musical. In a musical, the songs have narrative value to them. In 8 Women, they accomplish nothing but to lend the whole experience a surreal quality. They’re energetic and even pretty funny at first, but once you realize that the musical numbers aren’t advancing the plot along, they grow tiresome.

Though 8 Women‘s conclusion may be construed as “cheating” by some, it’s handled so well that it actually elevates the film from what you thought it was before. This film is a hilarious and riveting murder mystery that you shouldn’t miss. 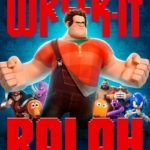 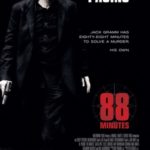