Choosing only two bands as a focus for a film about Manchester’s famous music scene is frustrating… especially when you may have chosen different bands.
By Lindaon February 8, 2014
0 Comments
Our Rating 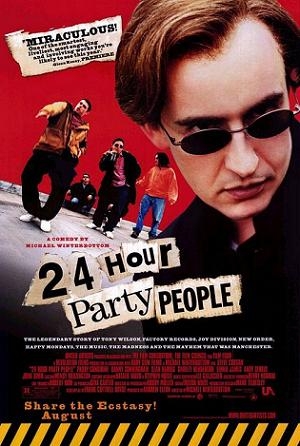 Let me just say this: Michael Winterbottom is an extremely cool and creative director that always seems one step from making a great film. I will go see anything that has his named stamped on it, despite the fact that I usually end up feeling slightly deflated by the end of his movies, trying to grasp for that last ingredient that his films seem to lack. If I figure it out, Michael, I’ll let you know. As it stands, 24 Hour Party People is once again a step from great… but DAMN the music is fantastic!

I’ve been a huge New Order fan for as long as I can remember, so I was intrigued when I read about this film that follows the Manchester (or “Madchester”) music scene of the 70s and 80s. Look at who the town spawned: Joy Division, New Order, The Smiths, Stone Roses, Happy Mondays, etc., not to mention a bunch of other bands that never hit popularity this side of the pond.

24 Hour Party People spans a thin line between documentary and fiction, using as the linear thread the career of Tony Wilson (Steve Coogan), who founded Factory Records, discovered a bunch of the bands, and ran hugely successful clubs that hosted these bands in Manchester. Tony quite often talks directly to the camera, and the look of the footage suggests newsreels from the 70s and 80s. The film admittedly looks exceptionally great, splicing in original concert performances effortlessly, often with re-created scenes using actors playing the musicians.

But the film chooses to focus mainly on two bands: Joy Division, and its doomed singer Ian Curtis (spot-on Sean Harris), and the Happy Mondays. The Happy Mondays? OK, this is where the film makes a big assumption that anyone outside the UK cares about the Happy Mondays. What about the Smiths, fer cryin out loud? Maybe Tony didn’t discover the Smiths (which would be the obvious reason for their omission), but it is like talking about the Seattle music scene and only talking about Soundgarden, as though Pearl Jam and Nirvana didn’t exist. Disappointing.

Still, the scenes of the Happy Mondays catching on were kind of fun (for instance the rock n’ roll cliché of one floppy boy jumping on stage and spontaneously inventing the signature dance for the new style of music). And Steve Coogan, a popular UK comedian in his other career, is quite good as Tony, effortlessly playing along with the film’s faux-documentary feel.

But despite an amazing soundtrack that will get your feet a-tapping (and which I’m going to run out and buy), 24 Hour Party People left me detached and wanting more. But I still have faith in you, Mr. Winterbottom. I’ll still be eagerly looking forward to your next film!