Part of the fun of watching is that you already know these guys, and you know all the words to the songs, whether you are a fan or not.
By Lindaon February 8, 2014
0 Comments
Our Rating 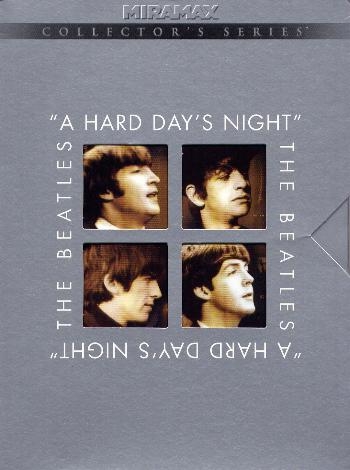 Like many people, I went through my own Beatlemania, albeit a generation or two too late, when I was 16. I suddenly gained a new appreciation of my mom’s 45’s of “Help!” and “She Loves You”, and got completely stuck on “Revolver”. I don’t know how I got around to NOT seeing A Hard Day’s Night during my long-ago obsession, so checking out the new DVD release was my introduction to the film. All I can say is, “Awww… look how cute and young they were!”

It’s weird to think that I’m older than the Beatles were then (John, Paul, George, and Ringo were in their early 20s). They are fresh-faced, mop-topped, and fashionable in their tailored jackets, skinny pants, and black boots. Just adorable.

A Hard Day’s Night roughly follows a day in the life of the Beatles. Watch them on a train! Watch them getting chased by crazed fans! Watch them act silly in a field! Watch them out on the town in swinging London! And finally, get treated to a finale concert (with sobbing girls in the audience pulling their hair and mouthing words of love to their favorite Beatle)!

Shot in crisp black and white, often with hand-held cameras, the film seems much like a documentary, so it was surprising to find out that almost every line was scripted. The bantering of the boys is witty and funny; they are all at ease and totally charming. Though John Lennon was never my favorite Beatle (my crush was on George), I could definitely see his charms in this film, as he steals every scene he is in, serving as a bit of a ringleader for the band.

Looking at the film in the world of MTV, A Hard Day’s Night comes across as a bit of an extended music video. I couldn’t help but think how the film would come across now if you weren’t familiar with the pop icons. Part of the fun of watching is that you already know these guys, and you know all the words to the songs, whether you are a fan or not. The camerawork, especially during the final concert scene, doesn’t seem that original these days, so you have to be reminded that this film was groundbreaking in its style. It is like a time capsule of, dare I say it, a more innocent time. (Just think how the Beatles themselves looked only 3 or 4 years later—all shaggy and jaded)!)

The DVD comes with a second disc of extras. There are tons of fun interviews from everyone from the pogo-ing dancer in the background of the London party scene, to the (grown-up) boy who threw a tire at Ringo and knocked him down. There’s the fellow who shot the famous photos on the poster and in the closing credits (which are wonderful), and the man whose father was the Beatles tailor, creating the famous collar-less jackets.

This is all fine and good, and offers much insight to many overlooked aspects of the work that goes into making a film. But… where’s Paul? Where’s Ringo? Especially since the loss of dear George just last year, it’s a crying shame that the remaining “boys” didn’t offer any of their own insights to the making of the movie (they MUST have been asked). It almost seems that with enough clicking through the extras, you’d be bound to find interviews with the remaining Beatles, but they’re just… not… there.

Other than that obvious complaint, the double-DVD of A Hard Day’s Night is good fun. It’s a real treat to hear the soundtrack remastered in clean, round stereo, bringing the songs to life as though you’re hearing them for the first time. The charm of the Fab Four is infectious, and the movie is silly, fluffy, and enjoyable. This disc set would make a fine addition to any Beatle-maniac and film lover’s collection.