Do you ever find yourself sitting in your car singing the words to your favorite songs?
By Timon February 8, 2014
0 Comments
Our Rating 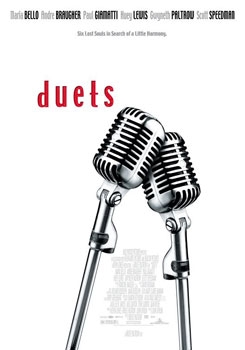 Do you roll up the windows so that nobody can hear you, or do you roll ‘em down and blast the volume? If this rings any bells, then you may wish to enter the somewhat underground world of karaoke. Isn’t it strange that there are parts of our culture that seem so far out of our comprehension, that we don’t really consider them at all? Apparently, there are some big bucks up for grabs in getting up on stage and singing someone else’s songs. Hmmm… I’ll have to consider a career change. *NOT*

Ricky (Huey Lewis) is a singer (big stretch, I know) who hustles local karaoke competitions, by betting on the most obvious winner a large sum of cash plus whatever is the evening’s prize. He then proceeds to blow them out of the water with his abilities. He gets a phone call which brings him to Las Vegas to attend a funeral and to inadvertently reunite with his estranged daughter.

Liv (Gwyneth Paltrow), is a young woman who, as she puts it, “worked the front line” at a casino with her mother. In an awkward moment, she meets up with her father while standing over the coffin of her dead mother. After the random suggestion from her grandmother (Angie Dickinson), she decides to join Ricky on his quest to conquer the world of karaoke. Paltrow shows us a talent that she is not known for: singing. You may not like the music styling, but you DO have to acknowledge the ability and talent  that she has. Ironically, Paltrow’s singing ability has encouraged the studio to release a couple of the songs she sings. I’m not betting the farm on a Grammy nomination, but we could hear her crooning away in the radio soon.

Todd (Paul Giamiatti), is a traveling salesman, who after showing up in the wrong city for a presentation, cracks. He realizes that he has spent the last 18 months trying to fight with land owners, county regulatory committees, and special interest groups to get an amusement park built on one of  Florida’s last areas of pristine beaches. He tells his wife that he is going out for a pack of cigarettes one night, finds himself in a karaoke bar watching someone singing Pat Benatar’s “Hit Me With Your Best Shot” and thus begins his journey into the karaoke life.

Reggie (André Braugher), is an ex-convict that sees his only skill as singing. We meet him shortly after he is released from prison and is now hitching rides with truck drivers. He meets up with Todd and unwillingly puts himself on stage for the crowd to appreciate his talent. In doing so, Reggie and Todd form a duet and set off on a dark road trip.

Suzi (Maria Bello) is a woman who will do just about anything to get her way, if you know what I mean. Her character is not well-developed, but we get to see her manipulate situations to her advantage. She, too, is another karaoke hustler that seems to roam from town to town in search of  the money. We see her trading sexual favors in order to get what she wants (hotel rooms and a paint job for the car).

Billy (Scott Speedman) is a cab driver who dropped out of the seminary just before completing his path to the priesthood. He chooses to look at life, and people, with the eyes of someone seeing only the good, not the bad. This is what gets him roped into the karaoke life, after meeting Suzi. (He does not sing a single note or melody.)

The thing that links all six of these characters (3 sets of  “Duets”) together is that, at one point or another, they have all won a karaoke competition that qualified them to sing in Omaha for the grand prize of $5,000.

The main plot line of this movie centers around Todd and Reggie. Their road trip to Omaha takes some interesting and sometimes disturbing turns into drug and alcohol abuse, violence, the disillusionment of the American dream, and, funnily enough, frequent flyer miles. Along the way, we watch this unlikely friendship grow and we see Reggie starting to cover up for Todd’s indiscretions and he tries to get Todd back with his family and out of the life that he has embarked on.

This movie has the soul of a mainstream movie, but will shock you at points. I’d recommended it as a rental.