Though there are no zombies for Andrew Lincoln to kill in Afterlife, the series still succeeds in giving the audience the creeps with its paranormal mysteries. 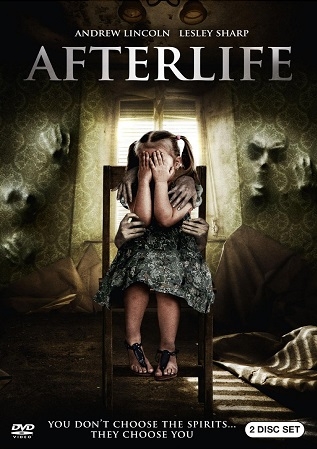 I’m a sucker for paranormal stories, with creepy unexplained phenomena that goes bump in the night. I may not be religious, but I’m not one to question the spirit world… there are just too many stories that make me unsure (and I’m not going to be the one to doubt the existence of an angry spirit). So Afterlife was right up my alley. It may have been a short-lived (two short seasons) BBC series, but it did manage to deliver surprising chills with its stories of the unsettled dead.

In a way, the setup is like the X-Files, with a sceptic and a believer solving mysteries. Andrew Lincoln (The Walking Dead) is Robert, a by-the-book professor that encourages his psychology students to question everything, especially folks that claim to have extra-sensory powers. Mediums can pick up clues about people by using sharp observation, Robert tells his students, and they can tell desperate people exactly what they want to hear. But Alison Mundy (Lesley Sharp), a woman reluctant to use her skills for any gain, might be different. She might be the real thing.

The gist of Afterlife is that viewers know that Alison is the real thing. She sees dead people, and often her visions are genuinely scary. Seriously, I found myself regretting watching some of these episodes just before going to bed. If we just saw Alison look sadly at the corner of an empty room, we’d be as skeptical as Robert. But we know what she sees, and knowing she is right provides the full-on heebie-jeebies that make Afterlife work.

Alison, the reluctant medium, is an interesting character. Robert himself is a little less gripping. Alison knows that Robert’s young son died (she can see the kid, of course), and Robert absolutely refuses to believe this. Even after she solves mystery after mystery, reconciling the spirits with their unfinished business, Robert is very very slow to give Alison even a glimmer of respect for her skills (after awhile, you are like, “Come ON!”). Still, their relationship as not quite friends, and not quite colleagues is intriguing and testy. These folks aren’t going to fall into each other’s arms any time soon, which adds to the inherent tension.

Apparently, Afterlife lasted one more season, just long enough to leave a legacy of a show that was successful in scary its audience without outstaying its welcome.