Expectations have been high to see Jordan Peele’s follow-up to his subversively funny horror smash Get Out. The trailer for Us teases us with a new horror: What if you were confronted by your own doppelgänger who was intent on killing you? Like Get Out, Us has layers of social commentary… but unlike his first film, Us just doesn’t quite come together. 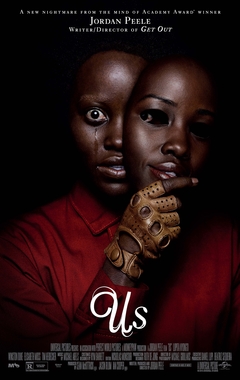 The opening scene flashes back to 1986. Young Adelaide is on a family trip to the beach, and she wanders away from the boardwalk excitement into a funhouse with a hall of mirrors. In a terrifying moment, she comes face to face with her own doppelgänger and we find out that the shock and fright renders her mute for months afterward.

Flash forward to “present day” and adult Adelaide (Lupita Nyong’o) is on her way with her husband (Winston Duke) and kids to the same vacation house near the same beach town of Santa Cruz. Understandably, Adelaide is squeamish to go back to the beach of her childhood trauma, but hey, it’s just a vacation, right? No reason to be jumpy. That is, until a weirdly menacing family show up in their driveway at night… looking exactly like them.

Us wastes no time turning from a entertainingly dopey family comedy to a home invasion horror movie to a bloodbath involving lots of razor-slicey shears wielded by the doppelgängers. Who are they? “We are Americans…” croaks the crispy-voiced Adelaide shadow (also played by Nyong’o), which prompted a giggle of nervousness and confusion from the audience (as well triggered my overwhelming desire to offer the character a cool glass of water).

Without giving anything away, we learn that these mirror-image people (who are admittedly a lot more haunted, wan, and creepy looking than their counterparts) do have a score to settle… a long-held resentment that has led them to this moment of sharpening blades to kill their “others”.

The thing is, the big reveal seemed like rote-horror that was supposed to hit the viewer with profound symbolism. But, at least for me, it didn’t. Maybe I missed it, but I was left kind of scratching my head with the unexplained and the strange gaps in logic. Now, I don’t expect screenplays to be water-tight, but when a fantastical premise is presented, there needs to be better back-up for emotional impact, Instead, after the big reveal we are left with a cheesy last-shot twist pulled right from just about every horror movie, leaving us with more questions than “a-ha!” moments. Maybe is missed something, but after my initial viewing I wasn’t invested enough to want to give it another shot.

Extra features on the Blu-ray + DVD + Digital Edition include the making-of featurettes “The Monsters Within Us” and “Tethered Together: Making Us Twice”. Deleted Scenes, Scene Explorations, and the featurettes “Redefining a Genre: Jordan Peele’s Brand of Horror”, “We’re All Dying”, “As Above, So Below: Grand Pas de Deux”, “Becoming Red”, and “The Duality of Us round out the extras.