How many times do we have to tell you people??? Stepping forward to “get a closer look” at a pulsating pod of goo is not a good idea!!!
By Lindaon January 27, 2018
0 Comments
Our Rating 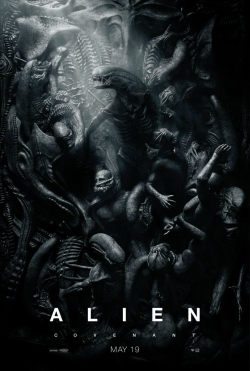 When director Ridley Scott revisited his Alien universe for the first time in over 30 years with 2012’s Prometheus, he apparently had been collecting ideas in his head for decades. The dense, bloated with promise Prometheus attempted to create an entire world of mythology and alien races, while cramming in the requisite horror thriller to kill off the vast majority of human subjects. The plotlines ended up being a gummed-up mess, leaving Prometheus not entirely loved by the critics and fans (like me) who were so looking forward to the film. So, this time it seems that Scott took the hint and went back to basics. Dumb people get picked off by scary, drippy aliens.

The ship Covenant is a colony ship, on a years-long mission to a life-sustaining planet with thousands of sleeping humans (and embryos) as cargo. A freak space-incident (won’t bother trying to describe it) endangers the ship and the mission, causing the crew to wake up under duress (or in one case, wake up in a ball of flames), and scramble to make things right for themselves and their precious still-sleeping cargo. There is the reluctant suddenly-new captain (wishy washy Billy Crudup) and his second in command (Katherine Waterston, stepping into the badass chick role), as well as a motley crew of men and women… and android Walter (Michael Fassbender). As none of them particularly want to go back to sleep in their capsule (can’t blame them), they jump at the chance to check out a nearby planet that seems to be emitting human-based transmissions (is that John Denver we hear???).

Up until this point, I was with Covenant, thinking it had potential. But when one crew member blurts out, “Hey! There’s a class M planet over there! Let’s change our entire super-expensive and risky mission and go check it out!” and the captain says, “We’ve just run all the data, so… Sure!”… well, I could see Covenant quickly sliding downhill into forehead-slapping nonsense.

There are extremely silly plot jumps for the sake of pushing the looming disaster forward. Like leaving one person alone on the landing shuttle while a huge team just jumps out on the unknown planet into water to go on a long hike. Where the landscape seems right out of Skull Island, along with a huge swath of broken trees. Where the land is lush and growing, but there doesn’t seem to be any birds, bugs or animal life. And over course it doesn’t take long for one soldier…err… crew member to step on an egg that puffs up some pollen into his snout to know that things are about to go very wrong very fast.

Covenant, like all its predecessors wastes no time in getting bloody and gut-burstingly gorey. I’d tell you not to get too attached to any characters, but that part is easy since there is very little character development anyway. You know that Ridley Scott loves his badass women characters, so it takes no stretch of imagination and expectation to know who of the crew will still be fighting at the end while everyone around her lays shredded and/or exploded in pools of blood.

That said, the one person who hams it up with relish and fun is Michael Fassbender. As Walter, a later prototype of Fassbender’s David from Prometheus, we learn that later editions like himself were made less-human, as people were creeped out by the super-being that was David. Walter is an android with a job, whereas David was an android with a mission. Ridley Scott seems to know that humanoids are a bit more interesting than humans, so Walter (and David’s) evolutionary thread paralleled with that of aliens and humans, turns out to be really the most interesting plotline of these newer movies. Humans don’t have a chance against these multi-jawed beasties, being sacks of guts and blood. But bleeding androids (with their milky goo) are less fun to destroy. I suppose we’ll have to keep the humans around a while longer.