What starts out as a sort of nightmarish Twilight Zone episode slowly evolves into a tale of survival, along the lines of Robinson Crusoe, or Castaway. 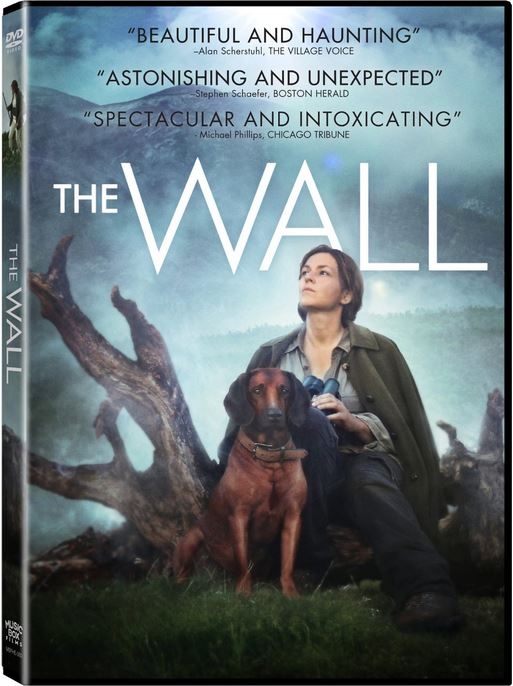 Based on Marlen Haushofer’s 1962 feminist novel, The Wall is a quiet mood piece, quiet, contemplative, and more than a little chilling in parts. It is also, impressively, basically a one-woman (plus dog, cow, and cat) show, with Martina Gedeck holding your attention in every frame, alone in her survival.

An unnamed woman (Martina Gedeck) narrates the tale in voice-over. She is in an Austrian hunters’ cabin, alone, in a stupendously gorgeous alpine setting. But she is gaunt and haunted, her hair chopped raggedly, her clothes grey with use. She is telling her story in flashback, writing it down on random scraps, and you know that she is running out of paper as she reminisces about her curious fate.

The woman goes with two of her friends to the cabin for a getaway. The others decided to go into the village, but she (and their dog, somewhat begrudgingly) decides to stay behind. She spends a quiet evening in the cabin, and goes to bed. She is not really alarmed until the next day that they have not returned. She decides to walk into the village on the lone road, which is strangely car-free, and smacks right into an invisible wall. What. Like a mime, she presses against a surface that cannot be seen. She contemplates this bad dream. She touches it again. She starts to explore the periphery of the area, and finds that this wall has cut her off from all other humanity. It is unclear what has even happened to the other people. She is completely alone.

Days turns to weeks, and she slowly accepts her predicament. It is thought provoking to imagine a modern person (such as yourself) in such a situation. How many of us would completely freak out? Commit suicide? Starve because of lack of knowledge of nature? She finds solace in the dog, who becomes her companion and friend, and from other animals inside her wall. But there is always a sense of danger and unseen doom, as her narration slowly reveals some incidents that shake up her literally small world.

There is a lot unexplained in The Wall. I found myself at times frustrated with the woman (she seemed to give up kind of easily when it came to finding ways through the wall… did she try swimming, for instance?). Other times I was impressed at her resourcefulness. I’ve read that some naysayers found her constant narration to be too much, but honestly if it wasn’t there, the slowness of the film would probably try the patience of most viewers. Undeniably, it is an astonishingly beautiful-looking film (like getting trapped in a mountain paradise). Whether or not you fall under the patient spell of the story, you will at least find yourself pondering what you would do if you found yourself trapped in the same situation.