Vampire movies and graphic novel adaptations may both be hot these days, but this movie blows. Slowly.
By Lindaon October 12, 2013
0 Comments
Our Rating 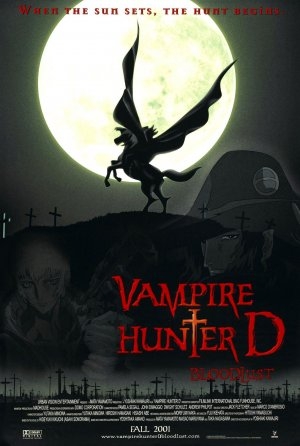 When bored, rule number one is to never look at your watch. Time will crawl. But you can’t help it, can you? Even if it feels mentally like ages, you’ll take a peek at your wrist to find that it is only 5 minutes later. Vampire Hunter D: Bloodlust is a movie like that. Oh, the restlessness; oh, the boredom (despite excessive action and visuals); oh, the other things I could be doing with those two hours, like having a cuppa in a cafe! But no, I sat through this film, gritting my teeth.

The story takes place sometime far in the future, supposedly on our very own planet. Vampires have ruled the earth for years, in some sort of monstrous abuse of power. Slowly humans have been fighting back, but the two races (I don’t know what else a vampire might be) still don’t get along.

A rich man’s daughter has run off with a dashing vampire named Meier (voiced by John Rafter Lee), and dad has put out a huge ransom to get her back. One bounty hunter who takes the challenge for the money is Vampire Hunter D (Andrew Philpot), a Dunpeal (half vampire, half human, living a cursed existence and fitting in nowhere). He is racing to find the Romeo and Juliet couple before another pack of Road Warrior-esque vampire hunters get to them first.

As is, Vampire Hunter D: Bloodlust doesn’t look bad on paper, but the quality of the anime just seemed to be run of the mill afternoon-adventure-cartoon quality. Then there is the voice acting, which is atrociously flat and wooden. And did I mention that D has a face on one of his palms that acts as a completely bizarre wisecracking sidekick? It gives a whole new meaning to “talk to the hand”!

Apparently the film is based on a popular modern gothic graphic novel series, and Bloodlust is a sequel to another movie based on D from 1985. But just because it is anime, doesn’t automatically mean a movie is good. Vampire Hunter D: Bloodlust is simply boring as hell.