Walking into The Mummy, here’s what I thought I would get: a mindless, big-budget popcorn movie that would probably be light on plot, logic and depth but heavy on digital effects.

And here’s what I got: a mindless, big-budget popcorn movie that was light on plot, logic and depth but heavy on digital effects. 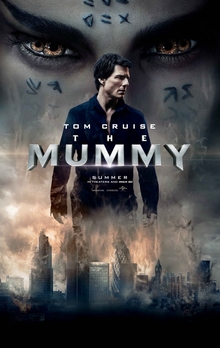 My expectations really weren’t that high, and I guess you could say they were met, but as the inaugural film in what Universal hopes will become a massive “classic monster” franchise – which will include such perennial faves as the invisble man (Johnny Depp’s been cast), Frankenstein (Javier Bardem) and the like – the whole thing was kind of meh. Fun at times, yes, and with a few laughs, but just kind of meh.

Tom Cruise stars as Nick Morton, a rebellious U.S. soldier, who dabbles in the lucrative business of artifact theft when he’s not risking his life and that of his best friend (Jake Johnson) in far-flung destinations around the globe. But when a mission in Iraq goes i-wry and a mammoth underground tomb-cum-prison is unexpectedly unearthed, Nick sees a potential payday on his horizon.

Too bad said tomb-cum-prison is home to the mummified remains of Princess Ahmanet (Sofia Boutella), one-time heiress to Egypt’s throne, whose succession to power was thwarted when her baby half-brother was born. After a super-pissed-off-and-epically-vengeful Ahmanet made a deal with the god of death – that would grant her immortality and him a corporeal body from which to rule the world – and scored a body of full of cool tats in the process, she went on a killing spree… only to be captured, entombed and buried alive by her late father’s soldiers. Oh, the best-laid plans!

What follows is equal parts zombie flick, action-adventure and horror-movie retread, as a newly cursed Nick tries to keep a newly awakened (and still super-pissed-off-and-epically-vengeful) Ahmanet from locating a missing artifact crucial to her world-domination plan. There are plenty of chase scenes involving Nick and his cipher-like colleague/aversary/paramour (Annabelle Wallis) fleeing armies of the undead, and Russell Crowe turns up in a supporting role as Dr. Henry Jekyll (yep, that one!), who runs some kind of anti-monster think tank intent on finding a “cure” for evil. But all in all, it’s underwhelming.

And, not surprisingly, given that this is meant to be a Tom Cruise vehicle and a “guys’ movie,” part of the problem for me is that the women onscreen get the short shrift. Boutella is okay, but doesn’t really possess the gravitas to be a truly memorable, formidable villain. Ahmanet seems more like a petulant millennial, and might have had more bite had someone else slipped into her tattered bandages. Likewise, Annabelle Wallis is entirely forgettable as Jenny, who doesn’t serve any real purpose in the film except to provide the occasional opposition to/flirtation with Nick. I kept wondering why there wasn’t someone stronger in that role… and then figured the filmmakers might have blown their casting budget on Cruise and Crowe.

Though mediocre, The Mummy does possess a few standout sequences, not the least of which is a fantastic “how did they DO that?!” plane crash that genuinely had me on the edge of my seat. And the digital effects, while overwhelming, are impressive. But those aren’t really enough, and the film doesn’t – as I’m sure the producers hoped – fill me with anticipation over the upcoming reboots.