All the President’s Men

As astonishing as the conspiracy that was uncovered, it that all the research was done the old fashioned way, with pencil and paper.
By Lindaon December 22, 2013
0 Comments
Our Rating 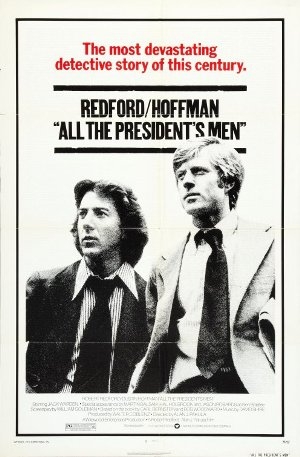 “Watergate” is one of those pop-culture words where the true significance has always flown over my head. Nixon was president when I was born, so I was just a tot when all hell broke loose for him when it was revealed that the White House had authorized wire-tapping at the headquarters of the Democratic National Committee in an election year. The whole incident was exposed because the dogged research and investigation of two Washington Post reporters, Bob Woodward and Carl Bernstein when five men were arrested breaking into a hotel suite. The reporters’ quest slowly revealed a shocking cover-up that went all the way to the White House, and shook the core of the country’s trust in the highest official. Because of the scandal, Nixon resigned in 1974, becoming the first, and so far only U.S. President to do so.

All the President’s Men takes the form of a political thriller with dogged journalists as the protagonists. Woodward (Robert Redford) and Bernstein (Dustin Hoffman) are introduced as young reporters at the Washington Post, without much seniority, but with a lot to prove. Their initial story about the break-in at the Watergate hotel goes largely unnoticed, except for them, the incident opens up many questions. The more questions they ask, the more things don’t add up. An anonymous inside informant, whom they nickname “Deep Throat” (Hal Holbrook) tells them ominously to “follow the money”. But the more the reporters find out, the more frightened they become. What would you do when you find out information about a cover-up that leads all the way to the White House?

What’s great about All the President’s Men is that not only is it a time capsule of a historic event that changed America forever, but it is also a time capsule of the lost art of old-school journalism. You can’t help but marvel at how much Woodward and Bernstein accomplished with good old-fashioned research techniques. Shoot, a phone, a pencil, note pad, and a typewriter was pretty much all they needed. Woodward’s book (on which the film is based) was so thoroughly detailed because he kept such excellent notes. When you see him taking notes onscreen, however, they are chicken scratches on a yellow notepad. Amazing.

The Two-Disc Special Edition Blu-ray of All the President’s Men offers a new extensive Revisited documentary looking back not only on the making of the film, but on the Watergate scandal itself. Redford actually contacted Woodward very early on, after some of the initial stories broke, and of course later played a major part in getting the story to screen. The newsroom in the film was the actual Washington Post newsroom, and Woodward and Bernstein played a large role consulting for the accuracy of the film. Some of the information is recycled on another extra documentary, also included, but Revisited is much more extensive, and better yet, goes into how Deep Throat was eventually revealed. 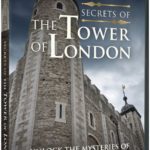 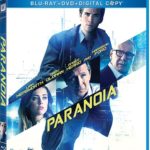