Where to Invade Next

It has always been Michael Moore’s job to make socialism sound like patriotism to the untrained American ear. Though he paints his arguments in sometimes VERY broad strokes and picks and chooses facts to support his views (don’t we all?), his movies are still often eye-opening and entertaining, whether or not you are entirely convinced. 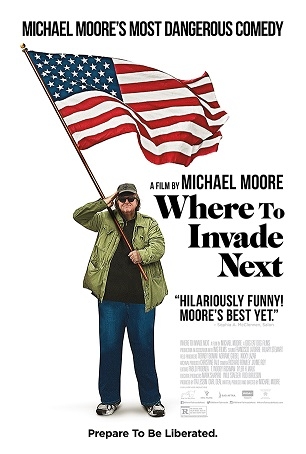 I went into Where to Invade Next thinking it was Michael Moore’s take on U.S. military spending and warmongering. Count me surprised (and a little relived) that the film outlines, instead, various social ideas across Europe that the U.S. should “steal” by “invading” the respective countries (which is apparently how we built our culture). Anyway, it is kind of a cornball conceit that allows Moore to parade around in European streets, factories, offices, and schools carrying a big ol’ American flag (that he triumphantly “plants” in the ground to make a point). This shtick gets a little bit tiresome, but some of the factoids that he unveils in the process are pretty fascinating.

For instance, at the start we meet an attractive working class Italian couple that runs out of appendages when they are adding up the WEEKS of vacation that they are entitled to every year, including surprisingly extra time off for getting married and, you know, working in December. What? Yep, in December, they get paid for a “13th month” of work, you know, so they can enjoy the holiday season. I don’t know about you, but I definitely would like this mysterious 13th month to be added to the U.S. calendar!

Similar visits to places like Iceland, Germany, Slovenia, France, Finland, and even Tunisia all reveals some piece of their national identity that really works for the benefit of all. Whether related to government, education, or equal rights, it is not hard to argue that we, as Americans, should “steal the good stuff” from other cultures to make the United States better. After all, it is the American way, right?

The frustrating and sad part of it all is that if you have a little knowledge of some of these places, you know that Moore is only highlighting the good stuff (to be fair, he does state this in the film). You don’t see racism, riots, the struggling working class, etc. You see instead slices of utopia, which, if combined, would make a pretty awesome pie of humanity. Instead, the film ends up making you kind of bummed and frustrated that the U.S. seems to be on a backward social slide based on infighting and fear. When Moore tries to wrap up the film at the end on a positive, go get ’em note, it was still hard not to feel kind of depressed about the whole thing.