Bryan Cranston’s stellar portrayal of LBJ is easily the most intriguing part of this “year in the life” drama. 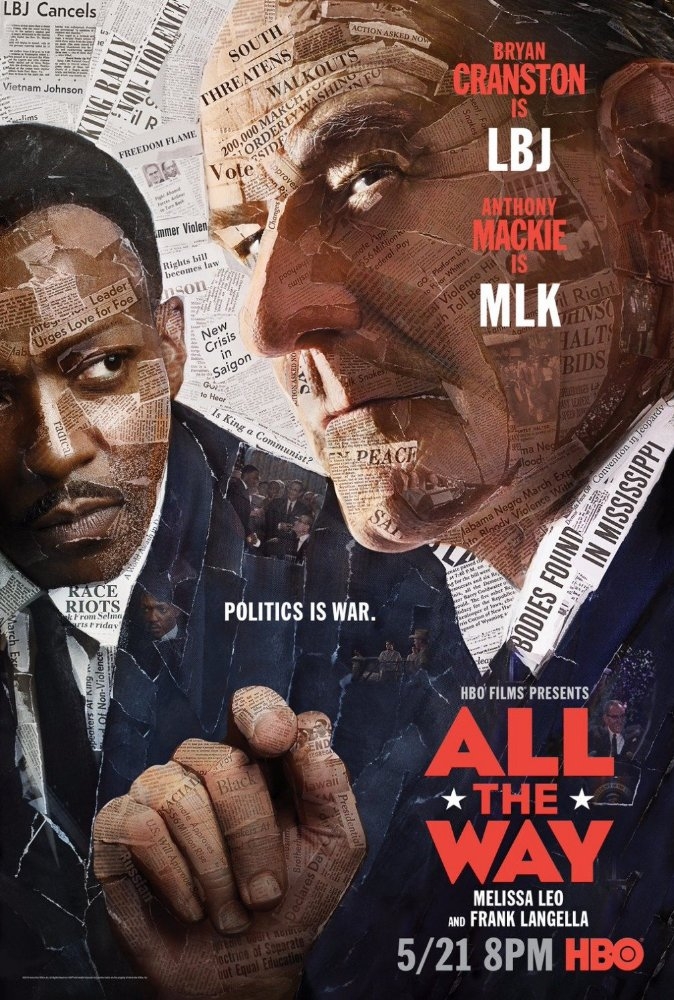 History is remembered by the biggest headlines. For those folks that grew up after the 1960s, that era, where America lost its innocence, tends to be bookended with JFK’s assassination on one end and Nixon’s Watergate scandal on the other. Not much is taught in the history books about the President who served in between the two, the man that actually started a lot of what JFK finished, for better or for worse, and set the tone for the United States’ involvement in the Vietnam war for the next decade.

All the Way begins right after Vice President Lyndon Baines Johnson (Bryan Cranston) has assumed the title of President. We see the hospital, the bloodied back seat of the car, and a stunned LBJ on Air Force One, trying to get a handle on inheriting this new burden. But he is ready. It doesn’t take him long to remove the personal effects of the Kennedys in the Oval Office, get fitted for new suits, and literally roll up his sleeves and get down to the business of being President of the United States.

The film follows LBJ’s first year in office, from the assassination to his (re)election. A lot happened in that year, from the passing of the Civil Rights Act to the murder of the civil rights workers in Mississippi to the murmurings of the unofficial start of the U.S. involvement in Vietnam. All the Way doesn’t want to leave any of this out, so it comes across as a dense, chapter by chapter account of a very busy year for LBJ. There is lots of barking on the phone, lots of insults, and an impressive amount of colorful language from the man himself. And, of course, there is even J. Edgar Hoover creeping around all of it (Stephen Root’s portrayal is a skeevy highlight).

All the Way reminded me of The Iron Lady, which won Meryl Streep an Oscar for playing Margaret Thatcher. Like that film, All the Way is a showcase for an outstanding performance (Cranston, almost unrecognizable, is pretty amazing as LBJ). And like that movie, it is also a film that seems afraid to leave anything out, making it seems like a perfunctory history lesson. It also made me think of Selma, a superior film about the same era, told from the perspective of Martin Luther King, Jr. All the Way‘s MLK (played by the fine, but underused Anthony Mackie) butts heads with LBJ to get the Civil Rights Act passed, which as portrayed in Selma, at least, is a fascinating story. I couldn’t help but fantasize editing parts of that film and this film together, with David Oyelowo’s MLK going head-to-head with Bryan Cranston’s LBJ. Someone needs to make this happen.

There is a very brief look at the (admittedly amazing) makeup that it took to turn Cranston into LBJ, and another short about the actual history that is portrayed in the film.