This thing about stoner comedies is that all they have to do is make you laugh, right?
By Lindaon July 12, 2016
0 Comments
Our Rating 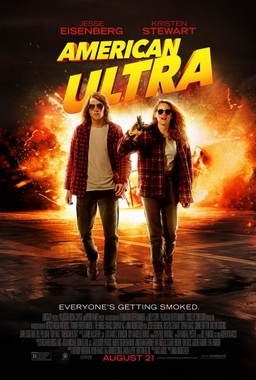 Jesse Eisenberg tends to play stammering nerdy guys, perhaps a little over-intellectual, earnest, pale and weak. Now image a character like that being a stoner… yes, ok, it is an easy transition. Jesse plays Mike, a stoner in small-town West Virginia, who lives with his longtime girlfriend Phoebe (Kristen Stewart). He works at the mini-mart, doodles cartoon apes, gets anxiety attacks when he tries to leave town, and, stoned, waxes poetic about car crashes as a metaphor for life. Sure, we know this guy.

Which is why it kind of brilliant that he is a “sleeper” CIA-trained assassin that just needs to be “activated” when he hears a bizarre sentence of gibberish, spoken to him by a mysterious woman (Connie Britton) in sunglasses. Oh, if it were only so easy for dim Mike. A couple accidental murders later, including one with a spoon to the neck (!), poor, slow-thinking Jesse is tries to make sense of something he doesn’t understand. But maybe he just wants to go take a nap first.

American Ultra is extremely, blood-splatteringly violent. And it is funny. There is barely any moment in the film where Mike or Phoebe isn’t, at the very least, splashed with blood. The body count escalates quickly. Topher Grace, seemingly combating his boyish looks lately, again plays the bad guy… a power-hungry CIA middle-manager who is suspiciously willing to wipe out an entire town because of one loose cannon. The movie is also strangely romantic. Dim Mike can only keep one consistent thought in his dim brain: When to find the perfect moment to propose to Phoebe.

American Ultra succeeds in the way that another summer movie, Vacation did for me, in that it made me laugh. Apparently I’m an easy target, because critics have ripped these movies apart. Sometimes you have to admit that a movie is just what it is supposed to be. Falling short of its potential to be brilliant, it’s still good enough. And, for me, that is good enough for a recommendation.