Prostitutes and curmudgeons are people, too! Thank you, Hollywood! 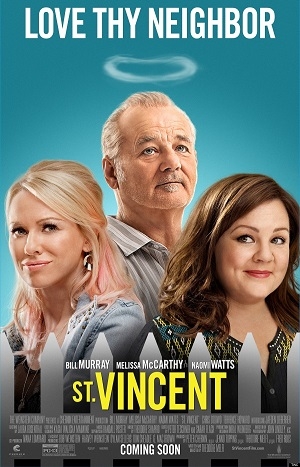 Among the many tried and true cliches of Hollywood films (from the training montage, to the dog always surviving, to the hero always getting to kiss the girl at the end): All boys need to be taught to fight in order to be a man. This is especially true if they are unfortunate enough to be kids of a single mom (which is a disaster according to many male screenwriters). (The motherless-girl equivalent, if you are wondering, is being taught how to look pretty by a mother/big-sister figure. See the Adam Sandler “family comedy” Blended for examples of both cliches in action.) It doesn’t matter if dad is still in the picture: If you haven’t played catch with a male mentor, or punched a bag with him, you are basically screwed out of Hollywood manhood.

Oliver (Jaeden Lieberher) is such a kid. He is little and bookish, and (poor boy), only has his mom Maggie (Melissa McCarthy) around. Oliver and Maggie, coming from their freshly broken home, move in next door to curmudgeonly Vin (Bill Murray, with a wobbly Brooklyn accent). Circumstances have Maggie working late, Oliver being stripped of his keys and phone from a bully at school, and Vin being constantly flat broke. This all adds up to a curious arrangement of convenience. For a fee, Vin offers to babysit Oliver after school.

As Vin parades Oliver around town, taking him to the horse track and bringing him to his favorite bar, we also get glimpses of Vincent the Kind. He visits a lovely older woman with Alzheimer’s in a home, he interrupts yet another smackdown of Oliver from the bullies at school, and he is kindly to his favorite pregnant “lady of the night” (Naomi Watts, with kind of a dreadful Russian accent). All of this pretty much happens with a whiskey in one hand, a cigarette dangling from his lips, and foul language spilling forth from his face.

St. Vincent mixes uncomfortable laughs with wretchedly depressing scenes, and I couldn’t help but feel like I had seen it all before. Bill Murray is always fun to watch, and I could tell that this is the type of performance that may get some critics buzzing about an Oscar nomination. McCarthy is lovely and toned down, showing she can keep her usual over-the-top comic stylings in check. And the kid? The kid is really quite good.

But after feeling like I was played in the final scene–where I was wiping a single tear off my cheek, and was totally expecting a slow-clap climactic moment–I ended up leaving the film with a shrug. There is something kind of patronizing to assume that an audience will be shocked to find that an old fart may have his own story, or that a prostitute may have a nuturing heart of gold. Hollywood has already taught us this, from Pretty Woman to the Pixar movie Up. So what’s left are a few nice performances in an otherwise kind of forgettable movie.