An Inconvenient Sequel: Truth to Power 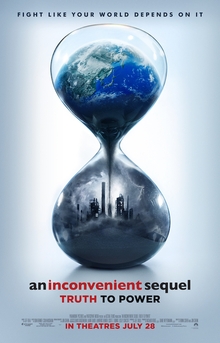 In 2006, Vice President Al Gore used his fame to explode environmentalism into the mainstream. Using a PowerPoint slide presentation as the core of his message, he managed to explain global warning in ways that the average layperson could understand. In turn, I’d hedge a bet that he is the only Presidential candidate (albeit a losing one) to win an Oscar.

This follow-up catches us up on 10 years of environmental news. Extreme weather keeps getting more extreme (from droughts to “rain bombs” to hurricanes) and 14 of the last 15 years have been the warmest on record. It is hard to look at that last fact especially and pretend that nothing is going on. Glaciers melting in far-off Greenland may look good on camera, but seem like someone else’s problem… like a polar bear. But when you have city officials in Miami (the number one city under threat of rising seas) grappling over the fact that a high tide can flood city streets on a sunny day, well, Houston, we may have a problem.

Al Gore literally takes center stage this time around. The camera follows him around as he teaches training seminars on his work (the graduates then go on to spread the word themselves), plus as he doggedly tries to keep the issues in the media. The most fascinating, and (with today’s knowledge) nerve-wracking part of the film involves Al Gore’s participation in the Paris climate talks of 2015. A behind the scenes player, shaking hands with dignitaries, Gore works the phones, wheeling and dealing, helping to find solutions that will push the last hesitant countries to sign. With such a triumph, you can’t help but wonder if the filmmakers held off on the release of this film in order to insert the ultimate “wah-wah” moment that punched environmentalism in the junk, when Trump decided to pull the United States out of the Paris agreement a few months into his presidency.

Gore reiterates that focus must be kept on the positive (or heck, we’d all just sit back and wait for the Earth to burst into flame). Trump’s move didn’t destroy the Paris agreement. Other countries doubled-down, and U.S. governors, mayors, and businesspeople chose to sign the agreement to represent Americans instead. When it comes to alternative energy, even Gore admits how astonished he is at the leaps and bounds have been in the development of solar energy options and electric cars.

On top of it all, Gore seems like a nice man. He admits that he didn’t decide to retire from politics, but the Supreme Court decided it for him (ouch). In turn, I think he has found an even more important and influential calling, and is doing great things. With people like him refusing to give up the fight, this creaking planet may just have a chance.