Noomi Rapace? The cold, rocky landscapes of Iceland? An anthropomorphized lamb? Released by A24? Seriously, take all my money now! 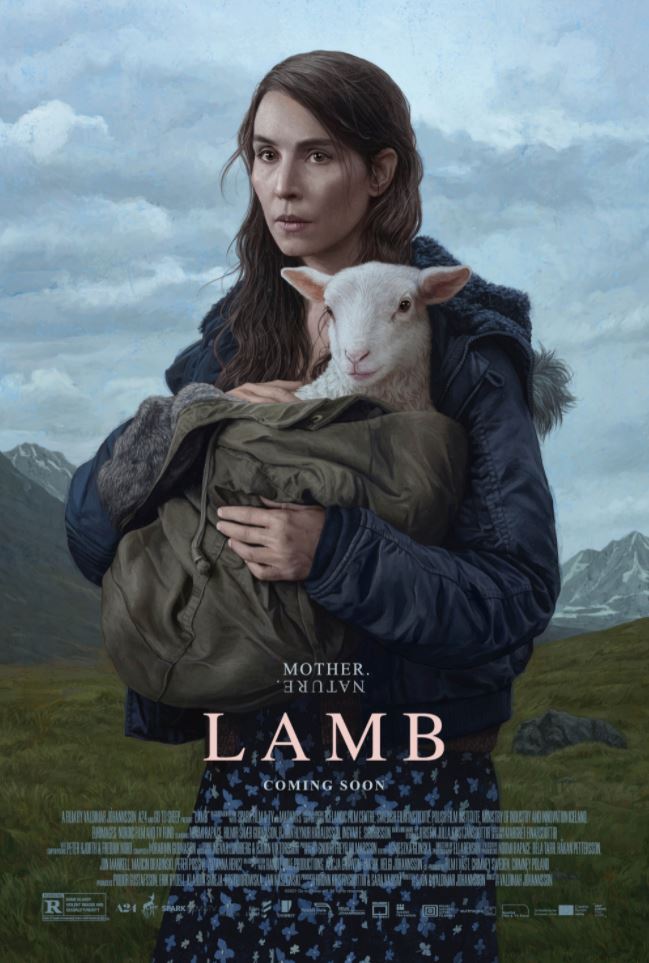 When the trailer for Lamb debuted, a friend of mine immediately forwarded it to me with the simple statement: “This made me think of you.” I gasped in laughter and intrigue as I watched it. Wait… was that Noomi Rapace trudging across the barren Icelandic landscape holding a lamb’s, um, “hand” like a child? And was the lamb wearing human clothing and walking on it’s hind legs? What the hell…?!? Why, yes, of course I wanted to see it immediately! Am I that obvious?

In short, Lamb is strange, hypnotic, perplexing, and as weird as I was hoping.

At first, you think that the movie is going to be without dialogue. After a mysterious and spooky “dark and stormy night” intro, we meet a couple going about their daily lives on a rural Icelandic farm. It’s lambing season, and there is a series of quite lovely, naturalistic scenes of the man (Hilmir Snær Guðnason) and the woman (Noomi Rapace) wordlessly going about the business of helping the mother sheep give birth. Looks like a good season, but then there is one more. Just below the camera’s lens (and clever way to tease the viewer), they pull the latest lamb from her mother with a plop. The man and woman pause, then look up at each other in disbelief. The woman only pauses for a short moment, then swaddles the lamb in her coat and takes her inside.

As they care for the swaddled lamb in their home, bottle feeding her, cuddling her, and eventually (yes) clothing her in a child’s clothing, it is as though the couple gain a new lease on life. Their re-awakened spark of parenthood (their home is notably barren, haunted by an unspoken loss) also seems to reawaken them as individuals. We learn that they are Maria and Ingvar, and with their lamb-child now named Ada, they seem to be happy for the first time in a long while.

But what the hell? You know this can’t go on (can it?), that something’s got to give. When Ingvar’s brother Pétur (Björn Hlynur Haraldsson) arrives, you are pretty sure that this is it. (To his credit, Pétur’s initial response is pretty much a deadpan, “What the fuck.”) But, amusingly, Ada’s presence turns out not to be the issue; instead it is the sexual tension between Pétur and Maria. This is kind of a trick, though… Remember, after all, there is still a lamb-child living with humans. There is some weird folkloric-horror shit lurking on the edges of this otherwise happy family.

The trio of human actors, to their credit, are all-in, making their actions (in this very strange tale) completely believable. But the weight of the story is equally carried by the animal actors in the film. From the loyal and intuitive sheepdog to the inquisitive and suspicious barn cat, they are all equal players on the farm. But most impressive? The sheep! Who would have thought that looking at a flock of sheep facing the camera would contain such a sea of interesting, expressive faces? And if a supporting actress(?) award could ever go to an animal, Ada’s sheep-mom would win, hooves down. There’s a lot of longing and unspoken sorrow lurking around this farm, but Ada’s sheep-mom will break your heart.