Despite an excruciating and terrifying middle sequence, Kathryn Bigelow’s portrayal of a horrific case of police brutality holds us at a distance… which is kind of a relief.
By Lindaon January 27, 2018
0 Comments
Our Rating 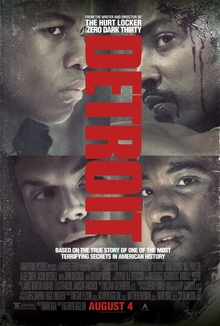 I won’t be the first to tell you that director Kathryn Bigelow knows her way around filming extremely intense sequences. From her praised war films The Hurt Locker and Zero Dark Thirty, she now turns her lens on a homeland war. An infamous incident during the race riots in Detroit in 1967 takes center stage in Detroit, but audiences will walk away shuddering that these sorts of abuses still are making the evening news today.

After a meandering setup showing how the riots started, giving us very brief introductions to the main players, Detroit zeroes in on a horrific incident at the Algiers Hotel. The crackling of so-called “sniper’s bullets” cause an arsenal of police to descend upon a low-key partying hotel in search of a gunman. Instead, they detain a group of terrified unarmed young black men and two white women, holding them hostage to force confessions. If a crazed white cop beats you and aims a gun at your head, whether you confess innocence or guilt really doesn’t make a difference. When all is said and done, three black men have been shot to death by cops and the rest of the victims have fled into the night.

This claustrophobic centerpiece of the film is truly unbearable to watch. It is like a combination snuff film and horror thriller. The victims cower with their hands against the wall, trapped mainly by the crazed ego of one young white cop (Will Poulter), whom we already know from the introduction of the film is trigger-happy. Even if you are not familiar with the actual incident, you just know it is not an “if” situation, but a “when”. You know the whole thing is going to end badly.

Where director Bigelow and her trusty screenwriter Mark Boal falter is the first and last third of the film. They know they’ve got an amazing central sequence (and I certainly don’t deny that it is furious filmmaking). But the problem is you barely know the players by the time they are in jeopardy (and the cops’ dismissal of “you people” doesn’t really help either). By sheer force of screen presence, Anthony Mackie, as a recently home Vietnam vet, manages to make something out of not much, and in the epilogue scenes we are steered toward survivor Larry (Algee Smith) to be the face of the botched attempts at justice.

But Bigelow isn’t as skilled at courtroom dramas, leaving the movie to end with a bit of a thud. You know it is not going to end well, so despite a few zingers from the witnesses, you already have a sinking feeling that you will be left with fury and defeat. Detroit‘s recreation of the horrible event itself is so powerful, that it is frustrating that the rest of the movie is a bit clunky. But looking on people’s faces as they left the theater, maybe that was almost a blessing. By the end of the film, really couldn’t take much more.