Well, color me surprised – this movie is really good! 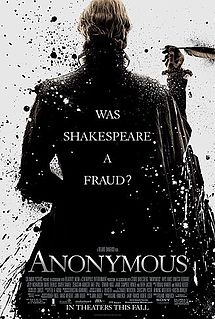 I’ll be honest, I had zero interest in seeing it. The trailers made it look tedious and Elizabethan and, to me, woefully dull. After sitting through a recent string of cinematic disappointments, watching a 130-minute film about who wrote Shakespeare’s plays? No thanks.

But, lo! What’s this? It was pretty excellent all-around.

Instead of a stuffy period drama, Anonymous unfolds as a taut political thriller, overflowing with treachery and betrayal and secrets and illicit affairs… not unlike the works of William Shakespeare, whose authorship of all the plays, sonnets and poems bearing his name is not only called into question but outright refuted in writer John Orloff’s fascinating, and entirely convincing, screenplay.

Rhys Ifans stars as Edward de Vere, the Earl of Oxford, whose station in society – combined with that society’s disdain for theater as “evil” – prevents him from following his true passion: writing. So, in order to give life to his work, he slips one of his plays to writer Ben Johnson (Sebastian Armesto) and pays him to stage it… and, more importantly, to take credit as its playwright if anyone asks the identity of its anonymous scribe. When the show’s a hit, Edward figures he’s found an outlet for his words in Ben. Too bad goofy, admittedly charming, womanizing actor Will Shakespeare (Rafe Spall, in a brilliant turn) decides, during an unexpectedly passionate curtain call, to step onstage and lay claim to the play himself. Soon, the public is clamoring for more and Shakespeare slowly becomes the increasingly greedy and self-important toast of the town.

While all this is going on, the political machinations over at the castle are hitting a few problematic snags, as the aging Queen Elizabeth I (Vanessa Redgrave) finds herself pressured by her conspiring chief advisor, William Cecil (an unrecognizable David Thewlis), and his conniving son, Robert (Edward Hogg), over the impending ascension to the throne. It doesn’t help matters that the plays being written by Edward and performed under Shakespeare’s name subtly (or not-so-subtly), and repeatedly, skewer the assorted folks holding seats of power.

Directed by Roland Emmerich – yep, that Roland Emmerich of comparatively less heady, more popcorn-flicky fare like Independence Day, Godzilla and 2012 – the film is spirited and gripping right from the get-go. Jumping back and forth in time, and never lagging for a moment, it trains its lens on the bed-hopping at the palace (Jamie Campbell Bower and Joely Richardson play the younger versions of Edward and Elizabeth, respectively) alongside the deeply rooted, underhanded dealings involving the Queen’s court.

Ifans, perhaps best known as Hugh Grant’s hygienically challenged flatmate in Notting Hill, is, here, a commanding screen presence. He has the tortured soul of an artist in perpetual conflict with his duties (and restrictions) as an aristocrat. Redgrave adds a nice dash of playfulness to her performance as the elderly monarch, and Spall’s Shakespeare provides moments of levity in the historically dense story.

The authenticity of Shakespeare’s works has been the subject of much discussion and debate in recent years and, I admit, I hadn’t realized to what extent. There are facts alongside posited theories throughout the film, and me not being able to distinguish one from the other is a testament to how truly plausible it all is.

Definitely recommend catching this worthy addition to the Oscar-bait offerings for the fall.