Do like to watch stuff blow up real good? Can you suspend your disbelief from an astounding height? Then director Roland Emmerich’s bloated, narratively laughable and somewhat unsettling destructo-porn opus might be for you. 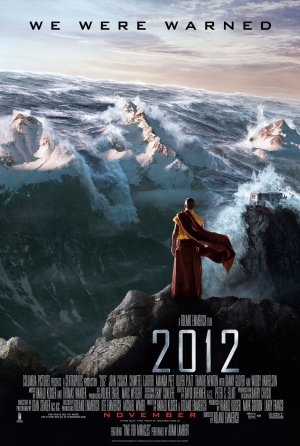 It will surprise no one to learn that the “plot” of the movie is fairly thin – neutrinos from the sun have been heating up the Earth’s core, and it reaches its boiling point to coincide with the doomsday prophecies citing 2012 as the year the world goes kablooie. Cue: the planet’s crust starts to crack, massive natural disasters ensue and billions of people die.

Anchoring the story – as much as a runaway train can be anchored, anyway – is a disparate collection of characters, including a novelist (John Cusack) and his ex-wife (Amanda Peet), a geologist (Chiwetel Ejiofor) and a nut-job conspiracy theorist (Woody Harrelson, whose performance really belongs in a completely different movie), the U.S. president (a wildly miscast Danny Glover) and his daughter (Thandie Newton), and a family of Russian-mobster types led by Zlatko Buric. While the filmmakers do attempt to give them all a hint of back story and emotional depth, it’s only in the scarcest of ways, and the cast’s sole purpose is obviously to flee collapsing buildings, escape crumbling rock faces and avoid the mass destruction erasing the planet’s population.

While the effects are very impressive – and, really, given the film’s estimated budget of more than $200 million, they should be! – the movie’s epic two-and-a-half-hour running time kind of diminishes its wallop. Too much of a neat thing, perhaps, because after a while it becomes just one toppling structure after another, one giant chasm opening in the ground after another, and it actually gets redundant and tiresome. The film could very easily have been trimmed by at least 30 minutes and would have been fine, especially since people seemed a little bored by the long and drawn-out proceedings. The number of folks who kept coming and going from the theater throughout the screening was substantial enough that my moviegoing pal leaned over to me mid-film and said of the wandering audience members, “WHAT is going on? Are they giving away free hams in the lobby?”

A touch more originality wouldn’t have hurt the film, either, since there were more than a few instances where I thought, “I liked this scene the first time I saw it, when it was in The Day After Tomorrow.” Chiwetel Ejiofor and John Cusack’s first 20 minutes in 2012 felt lifted, tweaked and divided up from Dennis Quaid’s first 20 minutes in TDAT, and there are similar déjà vu moments throughout. Also, I’m not sure if the campiness was intentional or an unfortunate result of an attempt at misplaced earnest storytelling, but anytime emotion or heart or (supposedly) inspirational thoughts were presented onscreen, the scene(s) wound up way over-the-top and practically dripping with cheese… to the point that folks were snickering.

Finally, despite all the impressive, effects-driven bells and whistles, one thing hung with me and bothered me about 2012: that billions of people die – many onscreen and in horrifying ways – but we’re meant to ignore them for the sake of entertainment. There are plenty of CGI-ed bodies plummeting to their deaths or being crushed by monuments or being swept away by tidal waves, and it was unsettling because, for me, it’s hard to desensitize myself to that level of loss of life, even in a high-concept popcorn movie.