Have you seen the trailer for Why Him?? What did you think? Because whatever your take on the trailer is/was will more than likely determine what you’ll think of the film.
By Vickieon May 4, 2017
0 Comments
Our Rating 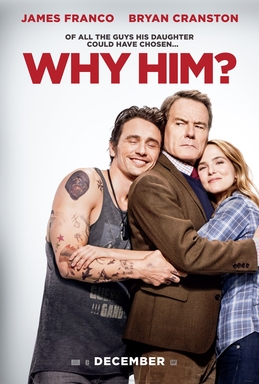 If you watched the trailer and thought, “OMG dude, that looks hiLARious and awesome!”, you’ll probably really, really enjoy the movie. If, like me, you watched the trailer and cringed, thinking Why Him? looks like yet another painful exercise in frat-boy humor and something Bryan Cranston may want to scrub from his resumé down the line, you’ll almost certainly still feel the same way by the time the closing credits begin to roll.

In the fishes-out-of-water film, Cranston stars as Ned Fleming, a happily married, strait-laced father of two, whose 22-year-old daughter Stephanie (Zoey Deutch – fun fact: she’s Lea Thompson’s daughter!) invites the family to spend Christmas in Silicon Valley at the elaborate home of her free-spirited, foul-mouthed-but-well-meaning multi-millionaire tech-mogul boyfriend Laird (James Franco). Instantly, and despite Laird’s enthusiastic-if-misguided efforts to bond with Ned and the family (which includes Megan Mullally as Stephanie’s mom, and Griffin Gluck as the token overjoyed, video-game-loving younger brother), Ned loathes Laird. LOATHES. And things kind of devolve from there once Laird takes Ned aside and asks for his permission to propose to Stephanie, prompting papa Fleming to completely lose his s**t.

Speaking of s**t, Why Him? opts for some woefully on-the-nose comedy when its toilet humor involves an actual toilet. But I digress…

The harder Laird tries to be accepted by Ned, the wider the divide between them becomes and the more eyeroll-inducing the antics of all involved. If, the instant it appears onscreen, you don’t realize the giant tank of moose urine in Laird’s living room will obviously figure prominently in the mayhem later on, you’re just not paying attention.

Peppered with high-profile, if random, cameos from the likes of celebrity chef Richard Blais, DJ Steve Aoki and Tesla founder Elon Musk, Why Him? very badly wants to be a culture-clash laugh riot, but it fails on a number of levels. Probably the filmmakers’ biggest misstep is making Laird very sweet and likeable. As a result, Cranston’s Ned immediately becomes unsympathetic. It’s hard for an audience to root for someone who’s being kind of a jerk to a guy very clearly trying his best to connect, and Ned’s histrionics feel fake and forced. But then again, maybe we’re supposed to root for Laird? It’s never really clear.

Franco is, as mentioned, surprisingly great – his character is insecure, charming, loves nature, altruistic and goofy. How can you not like him? Another cast standout is the always-fantastic Keegan-Michael Key as Laird’s “house manager” Gustav, whose devotion to his boss is rivaled only by his astute understanding of human nature. Cranston, on the other hand, is miscast as the dull-as-dishwater dad, and Mullally is wasted as his entirely forgettable wife. The two of them aren’t just bland, they’re boring… despite the filmmakers repeated attempts to remind the audience that the duo were once young and wild and crazy and loved KISS! (*yawn*)

Uneven at best, sloppy and juvenile at worst, Why Him? will appeal to a very small and very specific audience. For everyone else, it’s probably one holiday film best left skipped.