As I sat there watching yet another superhero movie that I didn’t remember asking for, starring another character I hadn’t even heard of, with the closing credits promising more more more… I realized that I have officially reached Marvel Fatigue. 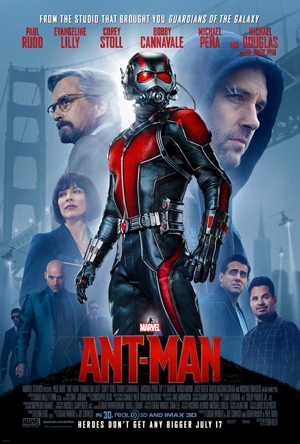 I know several people that would name Paul Rudd as one of their movie boyfriends. He’s ridiculously good-looking, but despite (rather than because of) that he is totally adorable because he is a big ol’ dork. Sure, he teases us with his six-pack in Ant-Man, but the surprise casting of him in the latest Marvel movie made this pretty-much unheard-of superhero a little more intriguing. Unfortunately the filmmakers commit a huge faux pas: Paul Rudd’s charm and dorkiness is subdued, and half the time the poor guy is stuck behind a mask. Ant-Man may be an every-man, but with Rudd being forced to play dull, he becomes simply anyone.

Rudd plays Scott Lang, a Good Guy (we are told over and over) and an ex-con. A sort of high-tech cat burglar, he was busted breaking into a technology behemoth and redistributing the riches (or something). He is trying to prove to his ex (the wasted Judy Greer) that he is reformed so that he can mend his relationship with his young daughter, who has a new father figure in Bobby Cannavale (also wasted). But the temptation of an easy break-in is too much to resist for Scott.

Rather than finding cash or valuables in this millionaire’s safe, Scott finds a weird looking high-tech jumpsuit that, when donned, shrinks the wearer to the size of an ant. Millionaire Hank Pym (Michael Douglas) may as well have crowed, “I’ve got you now!!!” as, for some reason, he has targeted Scott as the perfect new Ant-Man, a stealthy fighter-for-good that can battle Pym’s old apprentice Darren Cross (Corey Stoll)–a madman whose has designs on a similar shrinking suit, and less noble purposes.

Because there is no such thing as a Marvel movie without a sequel, so this introduction to Ant-Man is serving as the origin story–and man oh man, is the first half plodding. There is some forced drama between Douglas’ Hank Pym and his daughter Hope (Evangeline Lilly), as her loyalties are torn between her self-made tech guru dad, and Darren, whom she apparently still works for (and maybe has a relationship with? this is unclear…). Douglas and Lilly painfully play their scenes like some sort of bad drama, which peaks in groanworthiness when Hank confesses to Hope the true story of how her mom died. I was mentally begging Paul Rudd to bomb this scene, but no, his hands were tied.

Here’s my recommendation: Skip the first hour or so of this movie, as it is dull, rote, and plodding. On top of that, it is weirdly unfunny, despite setups that you THINK are supposed to make you guffaw. Now, go straight to the second half, because you know what? The movie actually gets kind of fun! Visual tricks with size and scale have always been entertaining, from The Incredible Shrinking Man to Innerspace to Honey, I Shrunk the Kids. There are some particularly inspired sight gags, especially in scenes in Scott’s daughter’s room, where a full-on tiny-man fight takes place. Also totally enjoyable is Michael Peña, as Scott’s ex-con buddy whose enthusiastic storytelling should be a movie in itself. Plus, if you’ve ever wondered what it might be like to shrink to molecular size, well, Ant-Man even tackles that, and the results are surprisingly moving.

But, just so you don’t get carried away but the fun momentum of the second half, I also recommend skipping the very ending because (SPOILER!) there is, yes, a requisite kiss. Lest you can’t see it coming from a mile away, it is between our hero and “the token girl”. All I can say, I don’t think I’ve ever seen less chemistry in a major film than between Paul Rudd and Evangeline Lilly. Yowza. If this movie weren’t digital, I’d suggest leaving that scene on the cutting room floor.