Okay, I watched this whole movie – which I was really looking forward to seeing – and I’m still not sure what it was supposed to be about. Redemption? Old flames? The military? The privatization of outer space? Hawaiian leprechauns? All of the above? None of the above?
By Vickieon July 12, 2016
0 Comments
Our Rating 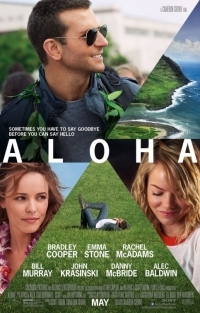 I can only assume that the disjointed, scattered, confusing, illogical and, sadly, mostly unentertaining film from writer-director Cameron Crowe somehow fell victim to over-editing or excessive tinkering that ultimately sacrificed, not enhanced or enriched, its story. C’mon, this is the guy who gave us Almost Famous and Jerry Maguire, folks! He knows how to spin a compelling yarn!

The film centers on Brian Gilcrest (Bradley Cooper), a defense contractor working for ethically questionable magnate Carson Welch (Bill Murray), who’s sort of a Richard Branson-y figure. Brian arrives in Hawaii for a five-day visit (even though the events in the film totally feel like they take place over the course of weeks instead of days) to dedicate a pedestrian gateway (huh?) on a U.S.-military base, and to oversee the launch of one of Welch’s satellites. While there, über-perky Captain Allison Ng (Emma Stone) is assigned to be his… babysitter? Liaison? Who knows. But Ng is so manic and instantly, inexplicably smitten (?) with Brian that, naturally, Brian immediately – I mean, like, right away and for no discernable reason – falls for her, too. What the what? They just met and have zero chemistry, but both are head over heels? No.

Thrown into this already narratively crowded mix are Brian’s ex, Tracy (Rachel McAdams, the only good thing about this film), who still carries a torch for him, and her husband, Woody (a hugely underused and underserved John Krasinski), who’s very clearly great but whom the audience is apparently supposed to… think is not great? That’s the only way to explain why we’re asked to believe Tracy is so fed up with their marriage (which doesn’t seem all that troubled at all) that she’d consider reconnecting with Brian.

There are at least six or seven different plotlines chugging along on in Aloha, from Brian’s efforts to secure a blessing from a Hawaiian chief to Tracy’s burning desire to reveal a non-secret to Brian, but none of them really work and all of them feel randomly thrown together, as though the film was originally as a four-miniseries that someone decided to cut it down to about 100 minutes. Characters behave erratically and inconsistently, storylines clunk to unconvincing conclusions, and Stone’s Ng is so all over the map as to not be believed – is she a buttoned-down, driven and respected soldier married to her career (as she appears at the outset)? A mystical hippie obsessed with recounting island lore (later)? An idealistic dreamer who loves the sky (still later)? A doe-eyed do-gooder trying to save Brian from himself (eyeroll)? It’s hard to tell because she jumps back and forth over and over again.

Cooper’s Brian isn’t particularly likeable, which is a problematic trait in someone who’s supposed to be the romantic lead – he’s not in Hawaii for more than 90 seconds before he’s flirting with Tracy… whose husband flew Brian in. And, speaking of Woody, why is he fully chatty in the opening scene but then COMPLETELY SILENT for the remainder of the film? The running joke is that he’s the strong, silent type who says a lot without actually having to say anything at all, but he was totally saying words out loud in the film’s very first two minutes.

And don’t get me started on that needless, obviously-shot-months-after-production-wrapped scene between Brian and Ng dropped in towards the end of the movie, wherein Cooper’s face looks completely different (likely as a result of whatever work he had done on it in the interim) and Stone is clearly wearing a bad wig.

If you follow Hollywood news, you already know that this dramatic rom-com was the subject of much scuttlebutt at the end of 2014, when leaked emails from Sony executives revealed – in no uncertain terms – it wasn’t exactly their fave upcoming release. At the time, I thought this was probably a gross exaggeration, and that the movie couldn’t be that bad.

I was wrong. It really is that bad.