Angie is everything Kate’s not. She eats junk food, listens to hip-hop, wears belly shirts and goes clubbing. She’s the anti-Kate, but in her womb rests all of Kate’s hopes and dreams for motherhood.
By Vickieon February 8, 2014
0 Comments
Our Rating 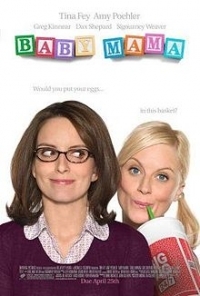 Let me begin by saying that I was wavering between giving this film four or five slices. It’s really a solid 4.5, but I decided to round up because I love Tina Fey and Amy Poehler, this somewhat-disappointing chick flick (don’t believe the hype – this totally is a girl movie and boys will steer clear) notwithstanding.

Tina Fey stars as Tina Fey (cleverly disguised as a character named “Kate”), a successful organic-grocery executive who is desperate with a capital D to have a baby. She wants one baaaaaaad. But she’s very single and, as we’re told in a (not) hilarious scene with her OB-GYN, she has an inhospitable uterus. What’s a gal to do? Enlist the services of Chaffee Bicknell (Sigourney Weaver, in a terrific comic turn), a sort of madam for surrogate mothers, who – after “careful” screening that likely did not involve an iota of actual screening – pairs Kate with Angie (Amy Poehler), a Philly party girl with a slacker boyfriend (Dax Shepard) and an accent that only lasts for about three scenes before it inexplicably (and likely to the dismay of the film’s continuity person) evaporates completely.

Angie is everything Kate’s not. She eats junk food, listens to hip-hop, wears belly shirts and goes clubbing. She’s the anti-Kate, but in her womb rests all of Kate’s hopes and dreams for motherhood. So, an overprotective and slightly panicked Kate lets Angie move in with her during the pregnancy, and The Odd Couple ensues. Orbiting the proceedings are a number of periphery but ultimately pointless characters, including Kate’s New Age-y boss (Steve Martin), her doorman (Romany Malco, who gets some of the film’s best lines), and her rather benign love interest, a smoothie-shop owner named Rob (Greg Kinnear). The problem is that none of them really have much to do with the central story that is, at its core, about the friendship between two vastly different women…so, they’re not particularly engaging. Martin’s funny, but he seems to have been inserted for comic relief in a movie that, I thought, was meant to be a comedy.

Both Fey and Poehler are fine, but not exceptional. Poehler has the more colorful role, and her Angie is hilariously inappropriate (best scene? the pre-natal vitamin), so Fey once again plays straight woman to an outrageous co-star (30 Rock, anyone?). But these are two fantastic comic actresses, so why is the material so…bland? Uninteresting? Clichéd? Writer-director Michael McCullers seems torn between sentimentality and humor, so he tries to balance both but doesn’t do much with either. Fey and Poehler also apparently gave the script a pass, but it’s seriously lacking in the clever, wry humor that’s the trademark of their work. Unfortunately, the project suffers as a result, and the lack of direction makes for an uneven film.

Is this supposed to be a touching-but-funny movie like Baby Boom? Or a wacky pregnancy comedy like Knocked Up? McCullers, and the film, never quite decide.