With a stick of chewing gum, a ball of twine, and a whole lot of “Science!” (not to mention poo!), Matt Damon unwittingly becomes the first resident of Mars. 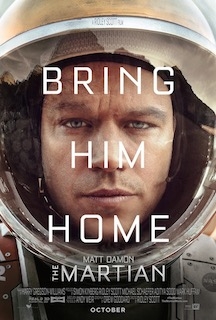 If you ever thought that after high school there was no practical use for algebra, like EVER… well, just be glad that you aren’t stuck on Mars without a ride home! Matt Damon, aka astronaut Mark Watney, is in just such a situation. And he is a BOTANIST, fer cryin’ out loud. I’ll bet he never thought he’d be stranded, alone, on a desert planet with a couple of potatoes, a lot of sealed-up poo, and some duct tape, and be expected to survive for hundreds of days until someone got his voice mail. But when his crew abruptly has to leave the planet during a horrible storm, he is knocked into oblivion by flying debris and left for dead. Unfortunately, by the time Watney wakes up, the ship home is long gone. Whoops.

That is the basic premise of The Martian, which is, while on Mars, literally a one-man show. Watney has some fun, recording a video diary (which allows him to narrate his thinking and actions) as he tries to figure out how to stretch his meager supplies on his home base for potentially hundreds of days until he can phone home. Meanwhile, things at home are more movie-tense, with lots of wringing hands as the head of NASA (Jeff Daniels) works with his team (including Chiwetel Ejiofor, Sean Bean, and Kristen Wiig) trying to figure out a way (financially and technologically) to pick up Watney before he starves to death. Meanwhile, up in space, Watney’s crew, led by Jessica Chastain, comes up with their own scheming once they find out that their poor buddy is still alive.

The Martian is surprisingly fun, and surprisingly funny. Damon has always been an amiable lead, and here he is the wisecracking guy who talks to himself while trying to problem-solve. Some solutions are very clever while some burn off his eyebrows. The enjoyment is trying to follow his thought process (which is Mission Control’s task as well, since no one can simply pick up the phone). If it were me, I’d just lay down and wait for death, but that’s why they don’t make movies like this starring people like me. It is much more enjoyable watching smart people come up with MacGyver-like solutions that make survival look easy if you just have some moxie and gumption.

The Martian is a popcorn movie for nerds. Sure, it doesn’t have the emotional or spiritual resonance attempted by Interstellar, and it doesn’t have the wide-eyed interplanetary wonder of Star Trek. Heck, Mark Watney may as well be lost in the woods, waiting for that single car to drive by every few years in order to hitchhike out of there. But it is successful as a science adventure, where, for a change, the science is the bonafide star of the show. And that, my friends, is kind of awesome.