Who can complain when you’ve watched an entire movie with a dopey smile on your face?
By Jenniferon February 8, 2014
0 Comments
Our Rating 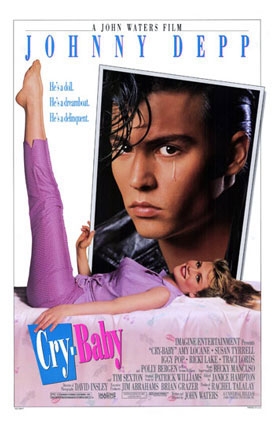 I swear, sometimes it seems like I have powers. This summer I developed the sudden and uncontrollable urge to watch Cry-Baby. I hadn’t seen it in over a decade, and I kind of wanted to buy it, but I wasn’t quite sure if it would be as good as I remembered. I waffled, I obsessed, and just when I almost threw up my hands and paid way too much for it on VHS, the DVD gods dropped the new Director’s Cut right into my lap. Betcha wish you could make things happen with your mind too.

Cry-Baby isn’t a great movie. Shoot, I’m not even sure it’s a good movie, but it’s so much fun that it doesn’t really matter. I was fourteen the first time I saw it, and when it ended, I watched the whole thing over again, just so I could show the most outrageous parts to my family. It turned an ordinary afternoon into The Cry-Baby Day, and watching the Director’s Cut quickly turned into The Cry-Baby Night. After the movie, I got sucked into all the extra features, and didn’t look up until they were over.

John Waters has a gift for taking an almost nonexistent storyline and turning it into something memorable. Cry-Baby is a 50s style teen musical based on the class struggle between the Drapes (more commonly known as Greasers) and the Squares. At the center of this struggle are Cry-Baby (Johnny Depp) and Allison (Amy Locane ). It’s love at first sight when this bad boy and good girl get together, but so many obstacles stand in their way! There’s Allison’s lame boyfriend Baldwin (Stephen Mailer), Cry-Baby’s wanna-be girlfriend Lenora, and a whole pack of Squares trying to keep them apart. Only Allison’s Square grandmother (Polly Bergen) begins to see that Cry-Baby isn’t so bad and begins to loosen up.

The best thing about Cry-Baby is the wacky but lovable cast of characters. In his first post-Jump Street role, Johnny Depp manages to simultaneously poke fun at his teen idol status and take it up a notch. What could be more fun than watching him sing (lip sync) like young Elvis, ride motorcycles like James Dean, and attempt a jail break in his underpants? I can never understand when people are surprised that Johnny Depp is funny—he has been from the very start of his movie career.

Amy Locane is great in the role of Allison, even if she hasn’t had much of a career since then. You’ve gotta love a girl who will drink a jar of her own tears for her beloved. Pepper (Ricki Lake) is Cry-Baby’s sister, the cheerfully pregnant teenage mother of two, and Wanda (Traci Lords) and Hatchet-Face (Kim McGuire) round out the Cry-Baby Girls. Hatchet-Face looks just like she sounds she would, but she’s a good sport, and even has a nice boyfriend played by Darren E. Burrows (better known as Ed on Northern Exposure). Fifties heartthrobs Troy Donahue and David Nelson make appearances, and Iggy Pop plays Cry-Baby’s uncle. We first find him bathing hillbilly-style in the front yard. “Woo-Wee,” he cries, “You caught me in my birthday suit! Buck naked!”

Cry-Baby is goofy and campy (note the over-the-top French kissing scene), but who can complain when you’ve watched an entire movie with a dopey smile on your face? The unrated Director’s Cut includes material that was originally cut in order to receive a PG-13 rating. It is a purer, better version of what we saw the first time, and they don’t scrimp on the extra features.

There is audio commentary by Waters, and the deleted scenes include poor little Ruthie, a child contortionist who brought her proud parents to the movie’s premiere because no one told her that her performance had been cut. You’ll hear all about her in t he 47 minute documentary “It Came From Baltimore”, which provides an in-depth look at the making of Cry-Baby, the movies that inspired it, and just about everything else you’d ever want to know. There are new interviews with all the major players, and, yes, that does mean Johnny Depp—hurray! Unlike so many special editions that seem to have been scraped together out of nothing, Waters pulls out all the stops with his Director’s Cut of Cry-Baby. The result is a disc so full of new additions that it almost feels like a sequel. A+ for effort, John Waters—kudos to you!