All I knew going in was that it was movie about a red-haired princess who’s probably brave. Happily, I discovered it was, indeed, that… and then much more. 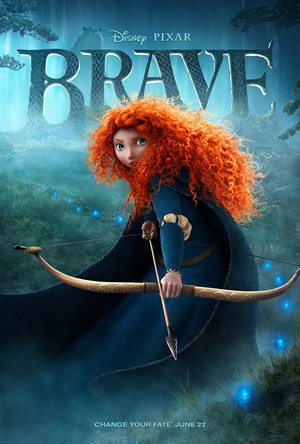 Here’s one of my favorite things about this grrrrl-power, action-comedy from Pixar: I honestly had no idea what it was about when I sat down to watch.

The filmmakers, voice actors and studio have done an excellent job keeping plot details tightly under wraps, so all I knew going in was that it was movie about a red-haired princess who’s probably brave. Happily, I discovered it was, indeed, that… and then much more.

Voiced by Kelly Macdonald, Princess Merida is a Scottish firecracker. She’s a tomboy with flaming-red hair, and she’s a killer shot with a bow and arrow. Her father, King Fergus (voiced by Billy Connolly), is a glorious, loving oaf of a man still smarting from a near-deadly encounter with a gigantic killer bear years prior – a meeting that left the King with one fewer legs. And Merida’s mother, Queen Elinor (voiced by Emma Thompson), is a regal and beautiful matriarch trying to balance tradition and duty with her ever-frustrating daughter’s refusal to conform to royal protocol.

When the time comes for Merida to be married off to a clan leader’s son, she balks. And quickly bolts. And that’s when the story gets interesting.

Eager to change her destiny, Merida makes a deal with a witch – clearly, if she’d ever seen a Disney movie before, she would have known this was a bad idea from the get-go – and is given a destiny-changing spell… that, not surprisingly, doesn’t go as planned.

Now, see, the trick in reviewing Brave is talking around the key plot point so as to preserve the surprise. Suffice it to say that what unspools thereafter is a surprisingly heartwarming – if fairly straightforward – story about independence and courage, with some really lovely observations and messages woven throughout about the relationship between a stern, well-meaning mother and her sometimes-stubborn but equally well-meaning daughter.

The voice actors are all terrific, with Thompson and Connolly perfectly cast as their respective characters, and Macdonald possessing a winning combination of pluck and pathos that makes for an ideal heroine. Animation-wise, it’s absolutely stunning. Though the characters themselves are somewhat cartoonish or exaggerated in nature (as is to be expected in this type of film), the realism of all the backgrounds is magnificent. Water and hair are two of the most difficult things to convincingly animate, and both elements are entirely believable here. And the teeny, glowing “wisps” are beautifully, delicately magical.

Though it sounds clichéd, this really is a movie that will entertain audiences of all ages. I’ve been a fan of Pixar since their debut shorts, and this latest offering – their first with a female protagonist, their first fairy tale and their first period film – is no exception.