One storyline is so very very good, but it fades into memory as we are forced to sit through a couple OK shorter stories, plus a bizarre sci-fi episode.
By Lindaon February 8, 2014
0 Comments
Our Rating 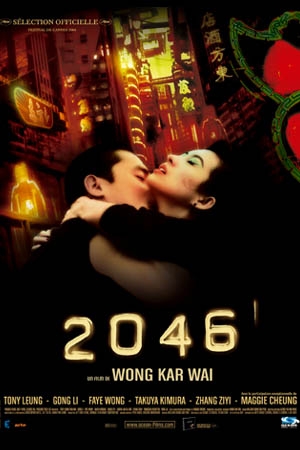 Wong Kar-Wai’s 2046 was easily my most anticipated film at the Seattle International Film Festival. I had been waiting for this film for years (WKW is notably slow in churning out his films lately). It was rumored to be a sort-of sequel to his gorgeous In the Mood for Love, and, well, it sort of is. But not really. It actually feels like some outtakes from In the Mood thrown together with some of his other short story ideas. In other words, it is frustratingly scattered.

WKW’s latest has the same problem as some of his earlier work, like Chungking Express. That film was two basically unrelated stories tacked together to form a feature-length movie. One story was brilliantly wonderful (Tony Leung’s cop falling for Faye Wong’s fast-food cashier), and the other was a bit of a clunky dud (Takeshi Kaneshiro’s detective chasing after Brigitte Lin’s femme fatale). 2046 falls back on that frustrating problem, in that there is one storyline that is so very very good, but it fades into memory as we are forced to sit through a couple OK shorter stories, plus a bizarre sci-fi episode.

Me beloved Tony Leung is the centerpiece of all the stories, as he (kind of) reprises his role of Mr. Chow from In the Mood for Love. Chow (in this film) is more of a 1960’s swinger, and truthfully a bit of a cad. He uses women for pleasure, and tosses them aside. The main bulk of the movie, and easily the best story, involves his relationship with a neighbor in the boarding house where he rents a room. Zhang Ziyi, who seems to be only getting better and better in utter-fabulousness, plays a sultry and somewhat girlish prostitute who starts fooling around with Chow, only to fall in love with him. Though they both had agreed from the start that their fling was only for fun and for sex, she can’t help but hide her hurt when he moves on. More than any actress working these days, Zhang once again displays her unique ability to put on smile while trying to push back tears of hurt, rage, and humiliation. Once again, she is absolutely brilliant.

If that plot were the only part of 2046, it would have been a full pie. But in order to flesh the film out to over two hours, Wong Kar-Wai tacks on a couple other side-stories of Chow’s working relationship with a lovelorn pretty neighbor (Faye Wong, adorable as usual), and a jaded woman his own age, who may be the true love of his life (Gong Li). Oh, and did I mention the sci-fi? There are occasional vignettes of Chow’s side-project of writing sci-fi short stories, about the land of “2046,” where a man (Japanese star Takuya Kimura) can take a train and fall in love with a beautiful robot woman (again, Faye Wong) who will never have the ability to love him back. Huh.

2046 ended up making me feel tired during its over-two hour running time. The film is, of course, gorgeous (with longtime collaborator Christopher Doyle behind the lens once again), and filled with a who’s who of Hong Kong and China’s finest actors. For eye-candy, it can’t be beat. But once you get beyond the visuals, the film seems like a bit of a dumping ground for Wong Kar-Wai’s latest ideas that he didn’t want to flesh out into individual films. It is as though he wasn’t sure which direction to take Mr. Chow next. In the Mood for Love (his best film) worked so well because the direction was focused on one simple plot. But with 2046, Wong seems to have slipped back into his own scattered habits, and I can’t help but admit that I was disappointed.