Jeremy Piven’s over-the-top performance as an early department store magnate will either make or break the series for you. 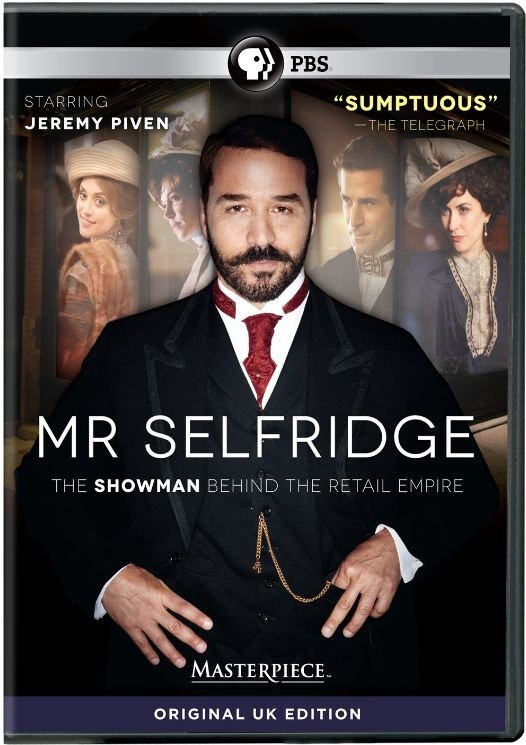 The first couple decades of the twentieth century have been hot in entertainment these days, especially with the huge success of Downton Abbey. A world war kick-started rapid social change, and advancements in technology were introducing things like automobiles and airplanes that were becoming more and more accessible to the common man. During the first decade of the 1900s, an American entrepreneur named Harry Gordon Selfridge went to London to open a grand department store unlike anything the traditionalist Brits had ever seen. Could you imagine buying a ladies’ dress, in your very own size, right off the shelf? Or having a salesperson cater to your every need? What about the chance to see a star-studded celebrity shopping next to you in the very same store? Selfridges promised all that and more.

Jeremy Piven plays Harry Selfridge in this Masterpiece series based not only on the store’s master of ceremonies, but on the workings of the staff of the store itself. In the one-hour episodes, we are treated to the dramas, love lives, triumphs and tragedies of a couple of handfuls of major characters. Young Agnes Towler (the charming Aisling Loftus) is discovered by Harry at the counter in another store. He sees her potential in her responsive customer service attitude, so when she loses her job due to his attentions, he promptly hires her for his new store. She harbors secrets at home, however, that threaten her new life as a working lady. Meanwhile, a waiter at the store’s café, Victor (Trystan Gravelle) is sweet on Agnes, but he finds that pleasing the rich ladies (sometimes in more ways than one), is an extra part of his job waiting tables. Harry hires a lovely stage actress, Ellen Love (Zoë Tapper),  to be the “Spirit of Selfridges”, but finds that he can’t keep his pants on around her, which is destined to cause trouble at home.

Standouts in the cast include the always lovely Frances O’Connor as Harry’s suffering but strong wife Rose Selfridge (who happens to have outrageously huge hats), Amanda Abbington as Miss Marple, a department manager who is mired in a drawn out affair with her married co-worker, Ron Cook as Mr. Crabb, Harry’s right-hand man at the store, and Katherine Kelly (with her delicious curling lip) as Lady Mae, the rich socialite, who happens to be Selfridges’ best go-to customer because of her amazing pull in London society.

But Mr. Selfridge is called, after all, Mr. Selfridge. It is Jeremy Piven’s job as the American entrepreneur to make or break the series. As played over-the-top by Piven, Selfridge enters every room (even if it is his own family’s dining room) like a circus master, his arms held up wide. Every comment comes across as a declaration, and every emotion is played to the back row. Every time he took center stage, I couldn’t help imagine the series with a different actor with a different style. There is something about him in the lead role which doesn’t quite click, which is frustrating.

I kept finding that I wanted to like Mr. Selfridge more than I did. The era is certainly interesting, and having a soapy drama take place in a department store is a fresh idea. But something about Mr. Selfridge just made me think that the show should be better. Maybe it will take more time to click, and the way that the series is presented, with a 10-episode arc, makes me think it is open to another season. If that is the case, the series will have to improve to lure me back.